Home > Back to Search Results > The patriotic spirit in Boston...
Click image to enlarge 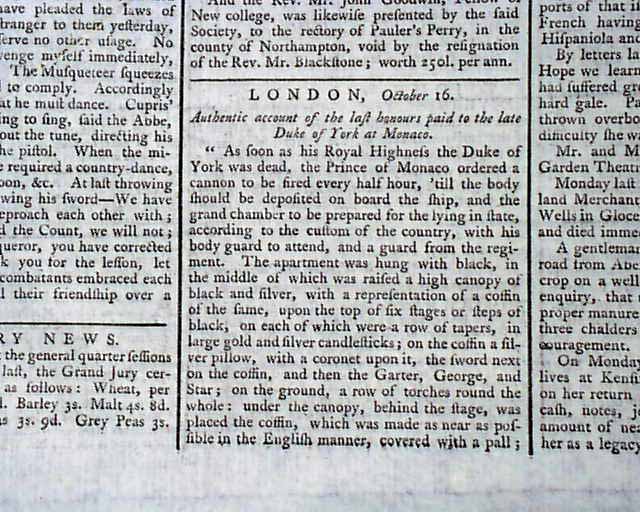 The patriotic spirit in Boston...

Item # 657562 THE GLOCESTER JOURNAL, England, Oct. 19, 1767  (currently spelled Gloucester)  Page 2 has a report on the funeral of the Prince Edward, Duke of York & Albany, which includes a graphic representation of the funeral proceedings. As the younger brother of King George III he was the presumptive heir to the throne until George II had a son. He was buried in Westminster Abbey.
Following this is a report from the Boston Gazette: "...shews pretty plainly the spirit (which some have termed, & perhaps not improperly, rebellious) that prevails thro' the American colonies:...a number of gentlemen met under their Liberty Tree to celebrate that day...loyal toasts...Union, stability and fidelity among the sons of liberty in America...May the man who will not defend the cause of his country in case of danger be held in universal contempt by every son of virtue & liberty. May the day which sees American submit to slavery be the last of her existence."
Four pages, a very nice & decorative masthead featuring engravings on either side. Never-trimmed margins, red tax stamp on the ftpg., nice condition.