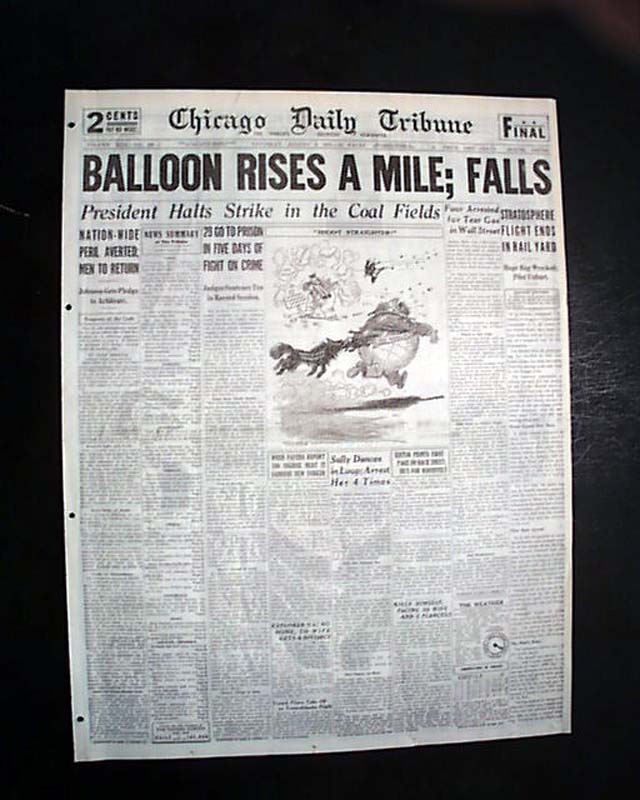 The front page has a great banner headline: "BALLOON RISES A  MILE; FALLS" with subheads. (see) Nice for display. A full back page pictorial is also nice for display. Probably only found in this Chicago publication.
Complete with all 24 pages, this is the "rag edition" printed on very high quality newsprint meant for institutional holdings. In great condition as such, a few small binding holes at the blank spine.

wikipedia notes: In 1932 the board of the Century of Progress trade show, to be held in Chicago in summer 1933, invited renowned Swiss balloonist Auguste Piccard to perform a high-altitude flight at the fairgrounds. Auguste declined, recommending his twin brother Jean instead. Jean took the lead, but did not have a U. S. flight license, so the Piccards invited Settle to fly the balloon. Named for the show, Century of Progress was built in America with a gondola donated by Dow Chemical, a gas bag from Goodyear-Zeppelin, hydrogen donated by Union Carbide, and scientific instruments supplied by Arthur Compton and Robert Millikan.

The first flight from Soldier Field, with Settle alone on board, attracted thousands of spectators and ended in a flop. Moments after liftoff, an open gas release valve forced Century to fall in a nearby railroad yard.