Home > Back to Search Results > An early & interesting letter from a "Mormonite"...
Click image to enlarge 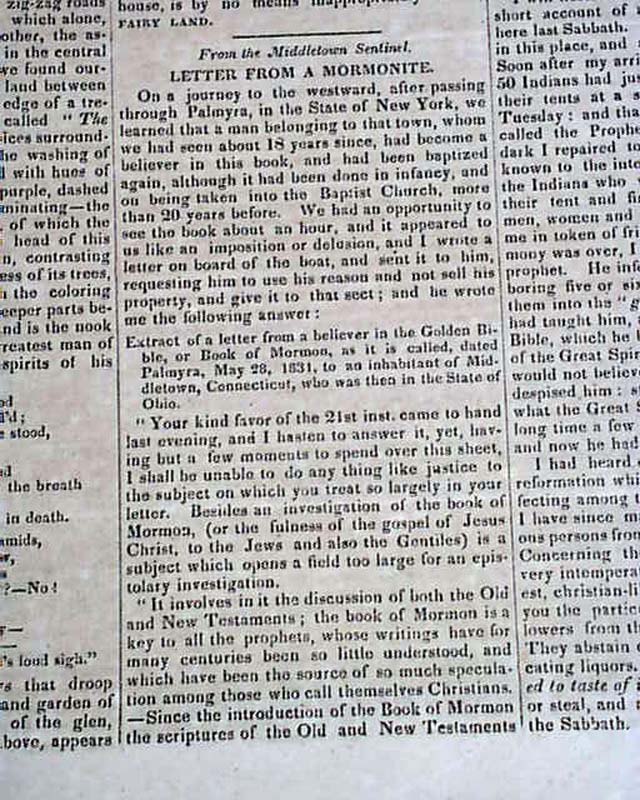 An early & interesting letter from a "Mormonite"...

* Among the earliest of reports to be had
* Palmyra, New York - Book of Mormon
* Mormons - Latter Day Saints movement

The earliest Mormon report we typically find in a popular newspaper title is the July 16, 1831 issue of "Niles Weekly Register". This report is just 4 days later.
The front page has: "Letter From A Mormonite" which takes nearly a full column. It begins: "On a journey to the westward, after passing through Palmyra in the state of New York, we learned that a man belonging to that town whom we  had seen about 18 years since, had become a believer in this book...We had an opportunity to see the book about an hour and it appeared to us like an imposition of delusion, and I wrote a letter...and sent it to him...and he wrote me the following answer:..." and what followed is a rather lengthy letter of response with a wealth of interesting detail about the Book of Mormon and related inquiries.
Complete in four pages, good condition.