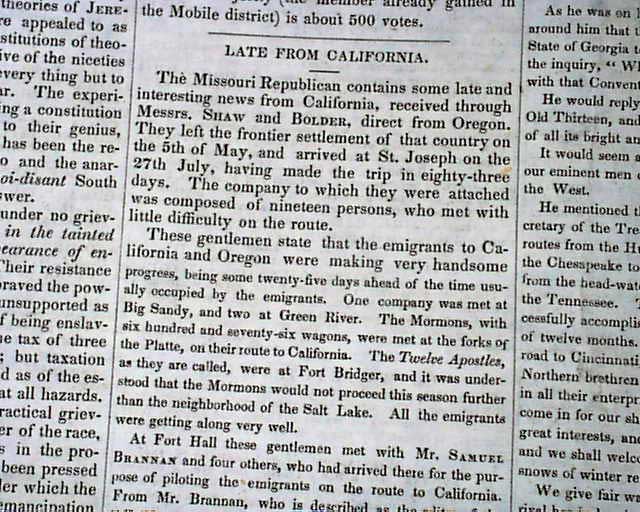 A great issue, as page 3 has an article: "Late from California" with a variety of items, including mention: "...the emigrants to California & Oregon were making very handsome progress...The Mormons, with 676 wagons, were meet at the forks of the Platte on their route to California. The Twelve Apostles, as they are called, were at Fort Bridger & it was understood that the Mormons would not proceed this season further than the neighborhood of the Salt Lake...".
Then there is reference to the tragedy of the Donner Party, an early report with a bit of detail: "...These gentlemen add, if possible, to the horror of the accounts heretofore received in relation to the sufferings of the emigrating parties which failed to reach California last winter. Seventy-three of them perished in the snow & from famine, and the living survived only by feasting on their dead companions."
Then also: "Capture of a Slavery with More than 500 Slaves on Board" with some detail.
Four pages, very nice condition.