Home > Back to Search Results > Death of Billy The Kid...
Click image to enlarge 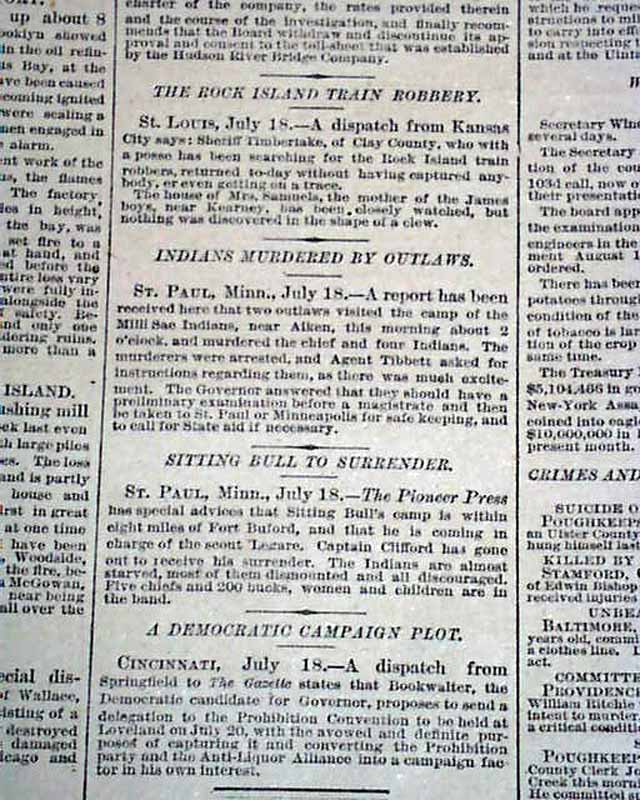 Death of Billy The Kid...


NEW YORK TRIBUNE, July 19, 1881  It can be difficult finding period reports of the death of infamous outlaw Billy the Kid. Many newspapers of the day never reported it. But this issue has a brief report near the bottom of page 5 headed: " 'Billy The Kid' Killed At Last" with a datelines from Las Vegas, New Mexico, noting: "The Gazette has positive information that 'Billy the Kid', the notorious murderer and outlaw, who for several years has been the terror of New Mexico cattle men, was killed on July 14 by Patrick Garrett, Sheriff of Lincoln County. Garrett had been on his trail some time and on July 14 found him in a cabin at Fort Sumner and shot him dead. The 'Kid' was a native of New York City, his real name being McCarthy."
Not that this issue needs more good content, but page 2 has 3 articles in succession: "The Rock Island Train Robbery" which was done by the Jesse James gang; "Indians Murdered By Outlaws" and "Sitting Bull To Surrender".
Complete in 8 pages. Even toning throughout, with browning at the margins. There is various chipping at the brittle margins with some minor loss, mainly to corners. Various margin tears as well. This issue is quite fragile and must be handled carefully.