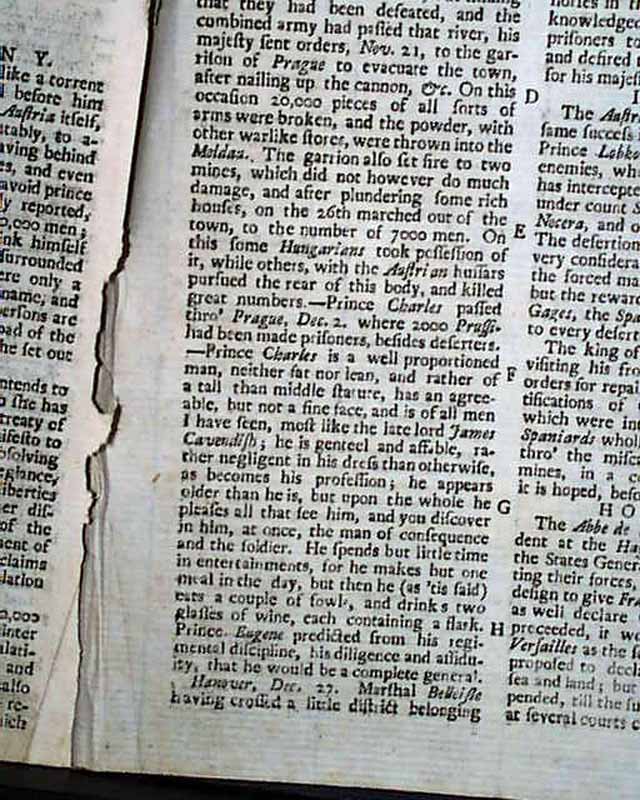 Item # 656794
THE GENTLEMAN'S MAGAZINE, London, December, 1744
Over 19 pages at the beginning of the issue are taken up with reports on events in Parliament under the guise of: "Proceedings & Debates in the Senate of Lilliput" as direct reporting on Parliamentary events was prohibited.
Close to two pages are taken up with a list of: "Ships taken by the French from the English" which includes several mentions of ships in America (see for portions).
There is a full page sheet of music titled: "Musick and Beauty" (see).
One very interesting paragraph has a description of Prince Charles, which includes: "Prince Charles is a well proportioned man, neither fat nor lean, and rather of a tall than middle stature, has an agreeable, but not a fine face...he is genteel and affable, rather negligent in his dress...but upon the whole he pleases all that see him..." with more (see).
Near the back is the "Historical Chronicle" which has various news reports from throughout Europe.
Complete in 54 pages, measures 5 by 8 inches, full title/contents  page featuring an engraving of St. John's Gate.