Home > Back to Search Results > New Yorkers pledge allegiance to the King...
Click image to enlarge 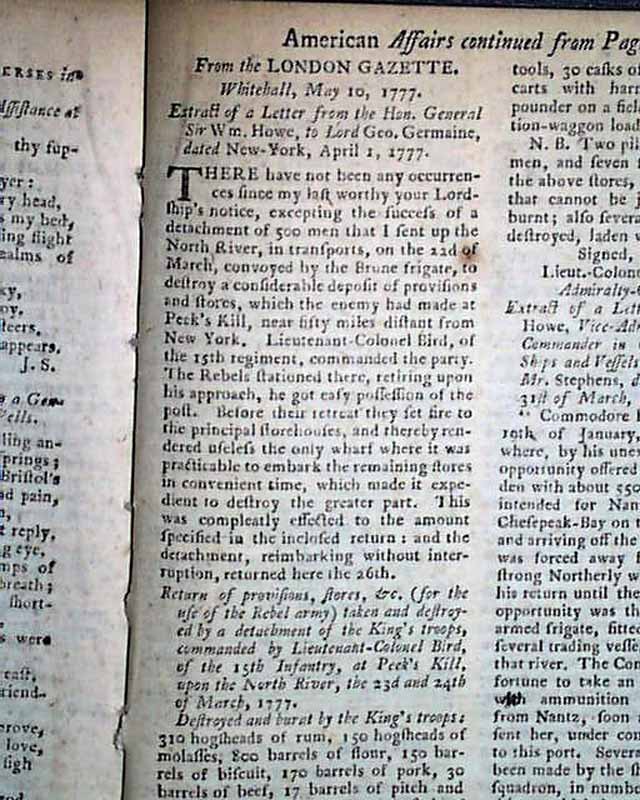 Item # 656793 GENTLEMAN'S MAGAZINE, London, May, 1777  Near the back are several letters from the seat of the Revolutionary War in America, including: "Extract of a Letter from the Gen. Wm. Howe to Lord G. Germaine dated New York, Apr. 1, 1777" which talks of plans to destroy provisions & stores at Peekskill (see). Another letter details what was destroyed, with subheads: "Destroyed & burnt by the King's troops" and "Destroyed and Burnt by the Rebels:". Yet another letter with talk of naval affairs in the Chesapeake Bay & includes: "...The General meditating an attempt by surprize to take or destroy a considerable magazine which the Rebels had formed at Peek's-Kill, about 50 miles up the North River...the enemy, upon the sudden discovery & approach of the armament next day, set fire to a part of their magazines & barracks before they retreated..." with more (see).
An item headed: "Letter From Carolina" begins: "On the morning of the 17th instant Fort Mackingtosh, at Stilla, was attacked by a large party from Florida. The garrison of the Stockade consisted of about 50 men..." . There is also a "Declaration signed at New  York" for allegiance to the King, including: "Whereas certain persons, now members of what is stiled the Provincial Congress of New York...are with such Congress pursuing measures totally subversive as well of his Majesty's government as of our liberty and happiness, we...disavow, renounce, and disclaim such their assumption of power & all submission of obedience to any orders or resolutions of the said Provincial Congress & of any Continental Congress...hereby recognizing & acknowledging our submission to his Majesty's government under which alone we wish & expect to receive those solid & permanent blessings..." with a bit more (see). This is followed by a brief letter from General Putnam (see). There are also a few other smaller tidbits concerning the war.
Plate called for is not included with this issue.
Complete in 52 pages, measures 5 by 8 inches, has a full title/contents page with an engraving of St. John's Gate, very nice, clean condition.