Home > Back to Search Results > Karl Marx as a newspaper reporter... The New Chinese War...
Click image to enlarge 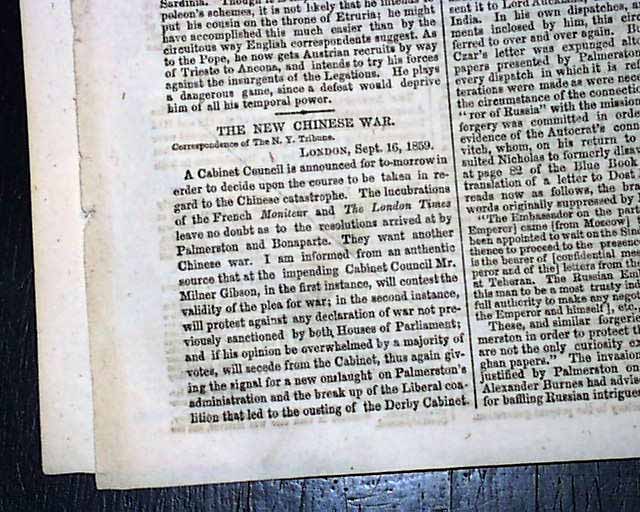 Karl Marx as a newspaper reporter... The New Chinese War...


NEW YORK TRIBUNE, Oct. 1, 1859  Although unsigned, page 6 has an article which takes more than a full column: "THE NEW CHINESE WAR," which is written by Karl Marx. A website dedicated to the works of Marx as a correspondent to the New York Tribune attributes this article to him.

Note: This is an interesting issue which provides the opportunity for a collector to own an original/authentic newspaper with an article written by Karl Marx, the communist revolutionary who would become more famous after his death than during his lifetime. Karl spent most of his life in exile, part of which was in London where he joined the Communist League. As noted in the website "The History Guide": "...during the first half of the 1850s the Marx family lived in poverty in a three room flat in the Soho quarter of London. Marx and Jenny already had four children and two more were to follow. Marx's major source of income at this time was Engels who was trying a steadily increasing income from the family business in Manchester. This was supplemented by weekly articles written as a foreign correspondent for the New York Daily Tribune ."
Complete in 8 pages very nice condition.