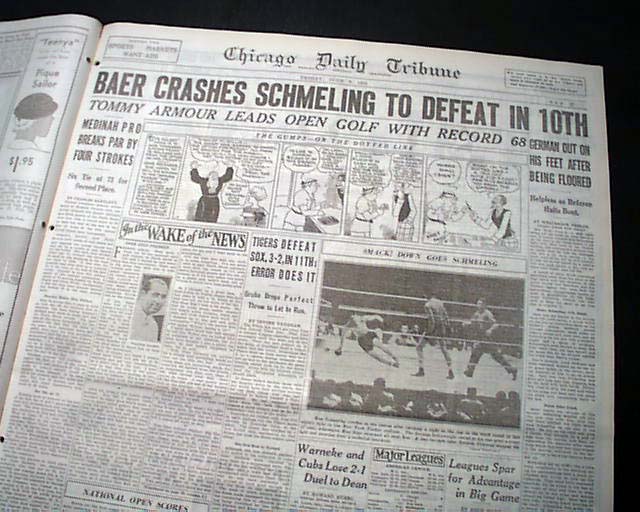 The front page of section 2 (sports) has a great banner headline: "BAER CRASHES SCHMELING TO DEFEAT IN 10TH" with subheads and photo. (see) Nice for display.
Complete with all 38 pages, this is the "rag edition" printed on very high quality newsprint meant for institutional holdings. In great condition as such.

wikipedia notes: In June 1933, Baer fought and defeated (by a technical knock out) the German heavyweight Max Schmeling at Yankee Stadium. Baer's trunks displayed an embroidered Star of David[14], which Max swore to wear in every bout thereafter. He dominated the rugged fighter from Germany into the tenth round when the referee stopped the match. Because Baer defeated Schmeling, German dictator Adolf Hitler's favorite, and because Baer had a half-Jewish father, he became popular among Jews, those who identified with Jews, and those who despised the Nazis' racial policies.