Home > Back to Search Results > One million dollars and he'll do the assassinations...
Click image to enlarge 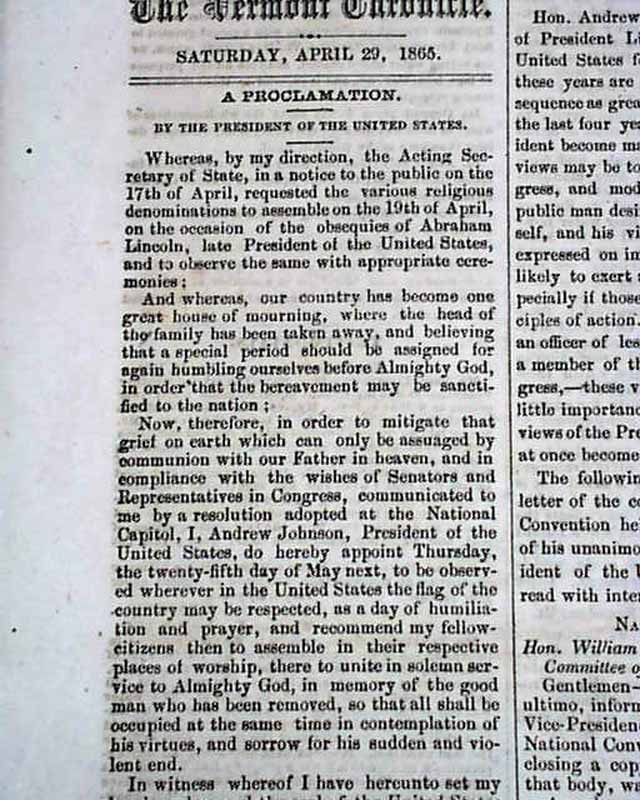 One million dollars and he'll do the assassinations...

* re. Abraham Lincoln's assassination - death
* Bizarre Southern desire for his death prior

Certainly the most notable content is on page 4 with column heads: "The President's Remains" "A Proclamation" signed in type by President Andrew Johnson calling for a day of respect for Abraham Lincoln; "Southern views & Feeling" "Negro Suffrage" "Lee's Surrender" which has much detail and takes over a full column; "Sherman's Announcement".
An intriguing item is headed: "The Assassinations Proposed" which cites a report in a Selma, Alabama newspaper: "...If the citizens of the Southern Confederacy will furnish me with the cash, or good securities for the sum of one million dollars, I will cause the lives of Abraham Lincoln, William H. Seward and Andrew Johnson to be taken by the first of March next. This will give us peace & satisfy the world that cruel tyrants cannot live in a land of liberty..." with a bit more. This item is dated December 1, 1864.
Eight pages, rejoined at the spine, tape mends inside (to flatten creases) do not deter readability, otherwise nice.