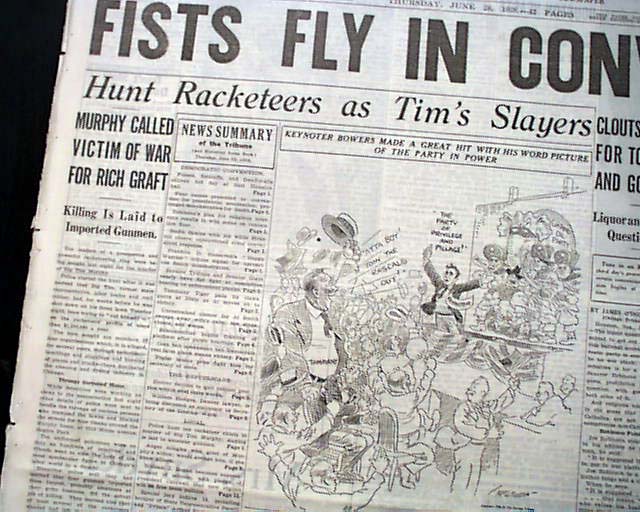 * Timothy D. "Big Tim" Murphy assassination
* Chicago mobster and labor racketeer
* Best title to be had - very rare as such

The front page has a five column heading: "Hunt Racketeers as Tim's Slayers" with subheads. (see) More on page 8 with related diagram. When it comes to gangsters, organized crime, and the nefarious activities born out of the Prohibition and Great Depression eras, no city is more in the forefront of our minds than Chicago - and what better newspaper can be found than the Chicago Tribune, self-proclaimed to be "The World's Greatest Newspaper".
Complete with all 42 pages, this is the "rag edition" printed on very high quality newsprint meant for institutional holdings. In great condition as such.

wikipedia notes: Timothy D. "Big Tim" Murphy (died June 26, 1928) was a Chicago mobster and labor racketeer who controlled several major railroad, laundry and dye workers' unions during the 1910s and early 1920s. Murphy rose to prominence at the beginning of the 20th century in the bookmaking racket with then-partner Mont Tennes. In the 1910s, he established an Irish American gang which became one of Chicago's most powerful early organized crime organizations. Murphy's gang was one of the few respected by Al Capone and the Italian American-led Chicago Outfit.