Home > Back to Search Results > Beer returns to the nation...
Click image to enlarge 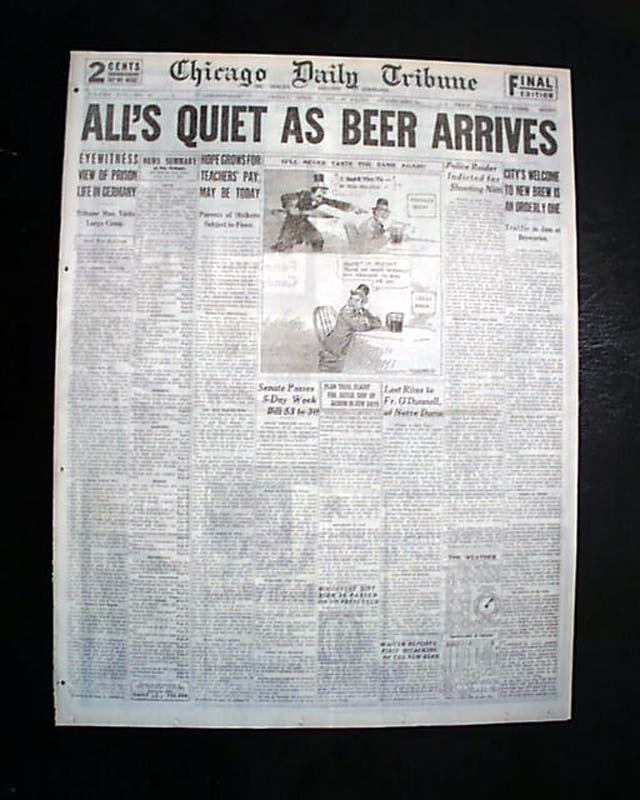 Beer returns to the nation...

The bold, front page banner headline announces: "ALL'S QUIET AS BEER ARRIVES" with one column ftpg. heads: "City's Welcome To New Brew Is An Orderly One" "Traffic in Jam at Breweries".
This was the Cullen-Harrison Act which allowed for the sale of 3.2% beer throughout the nation on April 7. The full end of Prohibition would come on Dec. 5 with the ratification of the 21st Amendment.
Page 2 has no fewer than 8 beer-related articles (see photos).
Also, the back page is filled with photos with ten of them related to the reintroduction of beer. The banner headline has: "Chicagoans Quench Thirst With Legal 3.2 Per Cent Beer---Detective Lang Reported Named for Assault on Nitti"
The ftpg. also has an interest gangster-related report with one column heads: "Police Raider Indicted For Shooting Nitti" with the report noting in part: "...accepted $15,000 from Ted Newberry, since slain, to kill Frank Nitti, Capone gangster, was reported to have been presented to the Cook county grand jury...".
When it comes to gangsters, organized crime, and the nefarious activities born out of the Prohibition and Great Depression eras, no city is more in the forefront of our minds than Chicago - and what better newspaper can be found than the Chicago Tribune, self-proclaimed to be "The World's Greatest Newspaper" - attributed in part to its dramatic, banner headlines! Whether hanging on your wall or part of an ongoing collection, these events are sure to capture the flavor of this infamous period in American history.
Complete in 42 pages, this is the "rag edition" printed on very high quality newsprint meant for institutional holdings. In great condition as such, 4 small binding holes at the blank spine.