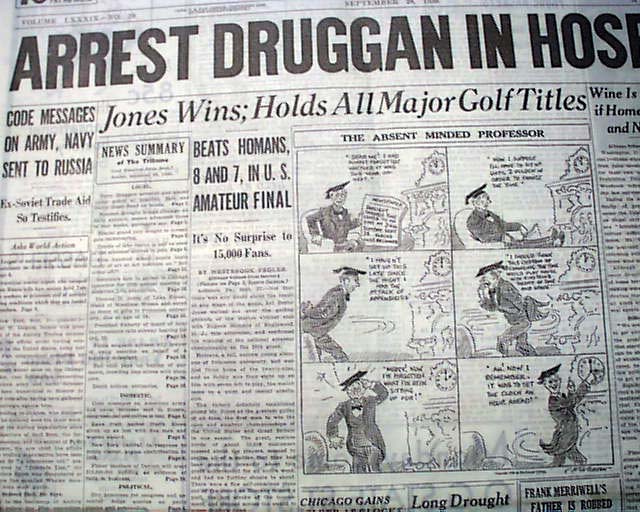 The top of the front page has an historic five column headline: "Jones Wins; Holds All Major Golf Titles" with one column heads: "Beats Homans, 8 and 7, In U.S. Amateur Final" "It's No Surprise to 15,000 Fans". The text carries over to the Sports section.
Also of note is the front page of the Sports section, which has its own masthead and dateline, with 7 photos of Bobby Jones & his career with a six column head: "HOW CAMERA CAUGHT GREATEST OF GOLF CAREERS".
Then yet page 3 of the Sports Section has part of the banner headline announcing: "...Bobby Jones Receives Fourth Major Golf Award of Year" with a nice photo of him.
The four crowns in his achievement were the British Open, British Amateur, U.S. Open, and U.S. Amateur. Simply terrific coverage and nice to have this notable content in the revered Chicago Tribune.
The complete Sunday edition with all sections including the 8 page comic section, and the photo-packed rotogravure sectoin. This is the "rag edition" printed on very high quality newsprint meant for institutional holdings. In great condition as such, 4 small binding holes at the blank spine.