Home > Back to Search Results > A record 8 rounds of golf in one day...
Click image to enlarge 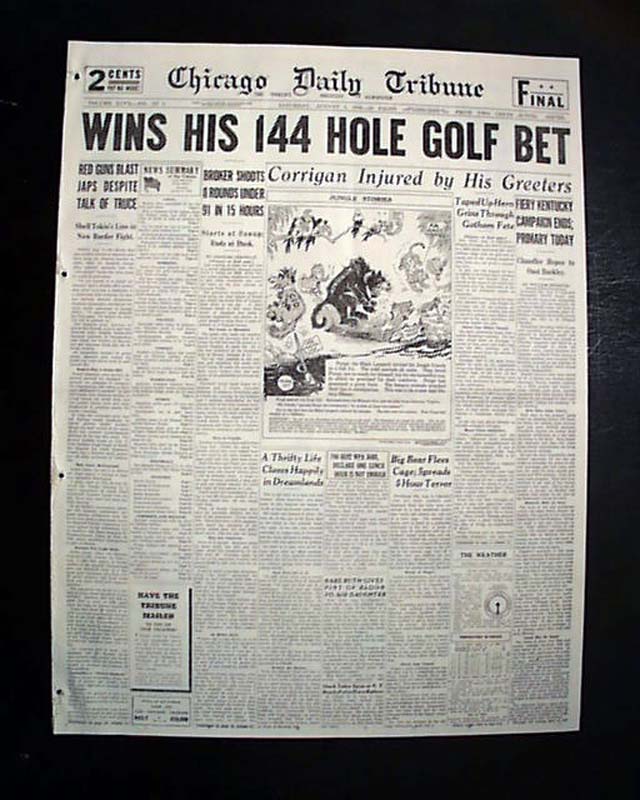 For the the collector of golf memorabilia, or if just intrigued by the history of golf, here is one of the more interesting tidbits of the sport which seems to have been all but forgotten.,
The banner headline proclaims: "WINS HIS 144 HOLE GOLF BET" with column heads: "Broker Shoots 8 Rounds Under 91 In 15 Hours" "Starts at Sunup; Ends at Dusk". This is the story of J. Smith Ferebee.

Ferebee cornered the market in golf marathons. He was not a great player, rarely breaking 80, but he could play at a pace of roughly a stroke a minute. In August, 1938, he bet a friend that he could play 144 holes, or eight full rounds, in a single day, with no round over 95. Even though it rained on the appointed day, Ferebee won that bet, teeing off in the pre-dawn darkness and finishing after 8 p.m.
There is a book written about him titled "King of Clubs". And Ferebee was from Chicago, making the report in this newspaper very special.
Ferebee’s is likely golf’s most impregnable record. Someone will one day win more than Jack Nicklaus’s total of 18 major titles. But who would want to break Ferebee’s mark? It comes from an era that will not be seen again.
Half of the back page is taken up with  4 photos of Ferebee and his one day golf saga (see).
Complete in 22 pages, this is the "rag edition" printed on very high quality newsprint meant for institutional holdings. In great condition as such, 4 small binding holes at the blank spine.