Home > Back to Search Results > John Paul Jones is applauded at the opera...
Click image to enlarge 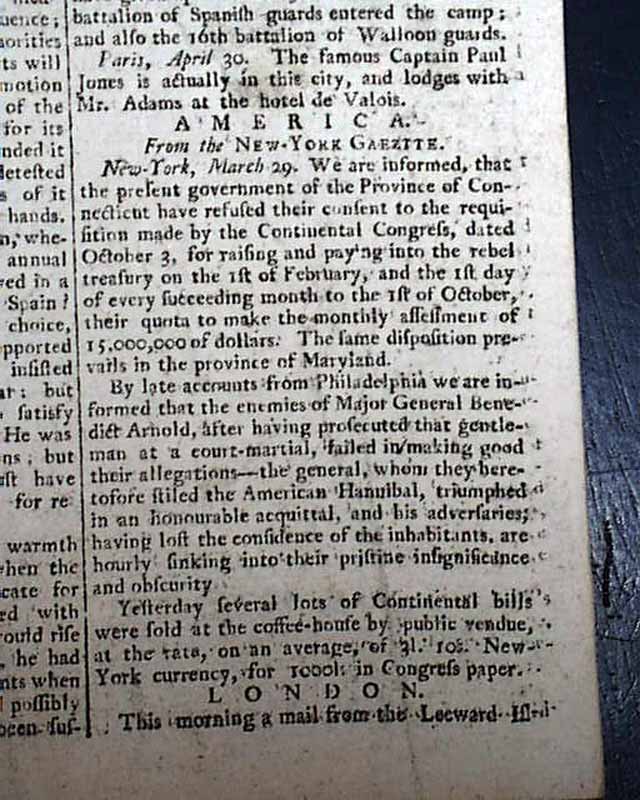 John Paul Jones is applauded at the opera...

The front page has: "America" with news from the New York Gazette including: "...the present government of the Province of Connecticut have refused their consent to the requisition made by the Continental Congress...for raising & paying into the rebel treasury...The same disposition prevails in the province of Maryland...we are informed that the enemies of Major General Benedict Arnold, after having prosecuted that gentlemen at a court martial..." with more.
Page 2 includes: "Expectation still continues on ti-toe respecting Charles-Town...Should the British general succeed, it will be the severest blow the Americans have yet suffered & will require the most vigorous exertions on the part of our enemies to repair the hurt & loss of confidence...On the other hand, should Sir Henry Clinton miscarry, we may fairly bid adieu then to all further prospect of recovering our possessions in America..." with more.
Page 2 also has a very interesting, personal item from Paris noting: "An American officer was...at the opera with Dr. Franklin's grandsons in one of the front boxes: the pit did not seem to take any notice of him: but between the acts the name of Paul Jones being whispered from mouth to mouth, a loud clap instantly ensured. The officer, to whom the compliment was addressed, could not mistake the object of it: he therefore rose & thanked the audience several different times; it was in reality Commodore Paul Jones that the pit and boxes received in so distinguished a manner...The plaudits followed him till he got into his carriage."
Several additional war-related reports follow.
Eight pages, 8 1/2 by 11 1/4 inches, minor loss to an upper corner of the front leaf, full red tax stamp on the back page, nice condition.