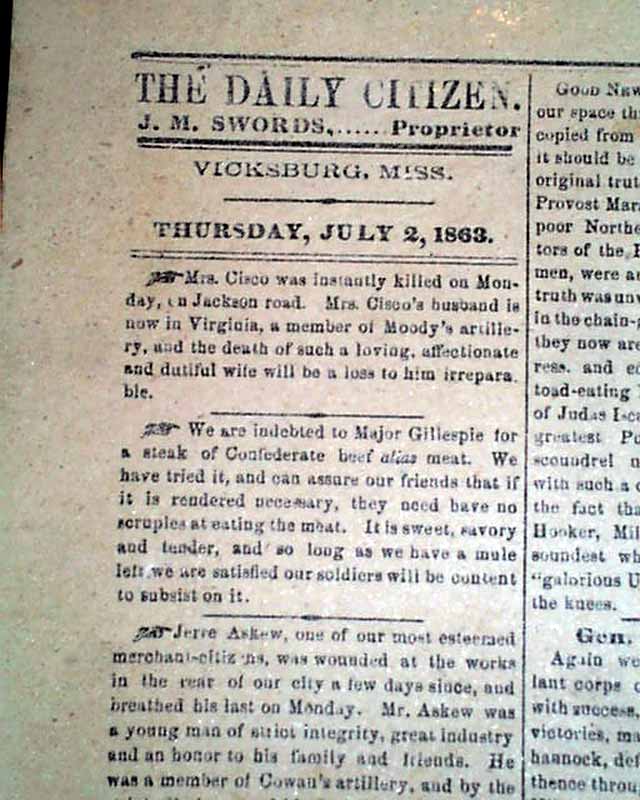 
THE DAILY CITIZEN, Vicksburg, Mississippi, July 2 (4), 1863  A fascinating newspaper and arguably the most famous of any newspaper printed on Confederate soil, not just for being printed on the back of wallpaper (many others were as well) but because of the circumstances which surrounded the creation of this issue.
This newspaper was edited and published by J. M. Swords. As the Union siege of this strategic city wore on, his supply of paper ran out, so the publisher resorted to the use of wallpaper, as did several other Southern editors during the rebellion. On this substitute Swords printed the following dates: June 16, 18, 20, 27, 30, and July 2, 1863. Each was a single sheet, four columns wide, printed on the back of the wallpaper.
On July 4, Vicksburg surrendered, the publisher fled, and the Union forces found the type of the "Citizen" still standing. They replaced two-thirds of the last column with other matter already in type, added the note:

Evidently, after a few copies (how many is unknown) had been run off, it was noticed that the masthead title was misspelled as "CTIIZEN." The error was corrected, although the other typographical errors were allowed to stand, and the rest of the edition printed.
Because of the tremendous historic nature & curiosity value of this newspaper it is not surprising that it has been reprinted many times. Great care must be taken to ensure a genuine issue. The Library of Congress has a check sheet against which issues can be examined to verify authenticity. This issue is  genuine and the Library of Congress check sheet is included.
The issue measures 11 by 19 1/2 inches and has virtually no wear to the front page. The issue is protected by a very thin, transparent archival overlay which is almost unnoticeable. The wallpaper design on the reverse is brown wood grain pattern which shows wear where once previously folded. This is one of the nicer condition issues of this rarity we have had the pleasure to offer.

Civil Ware news from the Confederate ...