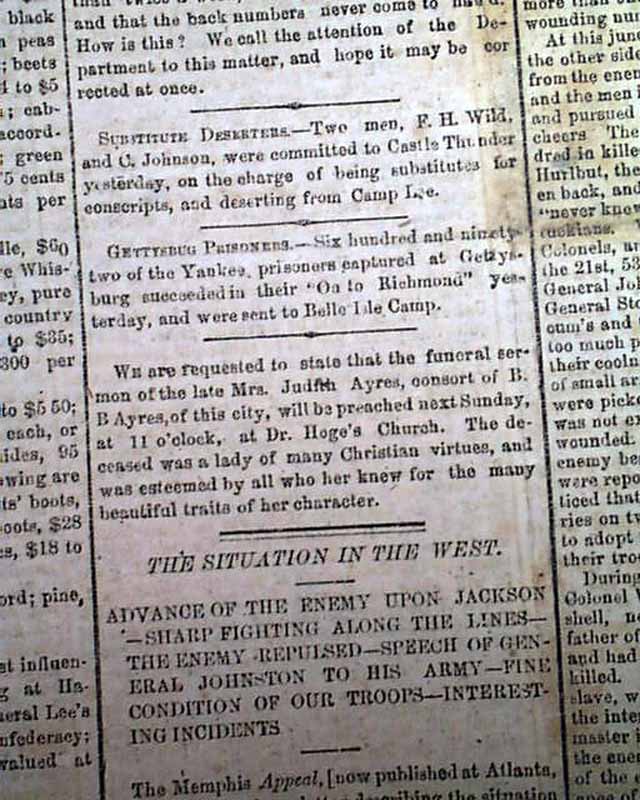 A nice newspaper from the capital of the Confederate States. The front page has much on the Civil War including items headed: "The News Yesterday" "The Situation In The West" "Advance Of the Enemy Upon Jackson--Sharp Fighting Along the Lines--The Enemy Repulsed--Speech of General Johnston to His Army--Fine Condition of Our Troops--Interesting Incidents" "Appeal From The Governor to the People of Georgia" which reflects upon the defeat at Vicksburg;  'Northern Employees In the Public Offices--Spies, Etc." "Latest From Charleston" and various smaller subheads as well. Plus there is a small, interesting item: "Gettysburg Prisoners--Six hundred & ninety-two of the Yankee prisoners captured at Gettysburg succeeded in their 'On to Richmond' yesterday, and were sent to Belle Isle Camp."
The back page includes the always interesting editorial which includes near the beginning: "From the Mississippi we have no news, which is good news...hear that the lines of Lee extend to the old battle grounds of Manassas...The Northern war party is very severe on Meade for permitting the 'escape of Lee.' He is set down, irrevocably in the category of McClellan..." and much more (see). Also on the back page: "Very Latest From The North--The Riot Suppressed in New York--All quiet--Particulars of the Surrender of Port Hudson..." "Views of the English Press On Lee's Invasion of the North..."The Riot In New York--Details of the Mob--Dreadful Scenes Of Violence--Negroes Hung To Lamp Posts, etc." and some smaller item.
Complete as a single sheet newspaper with a full banner masthead, never bound nor trimmed & in nice condition save for some dirtiness & toning to the upper right of the front page.