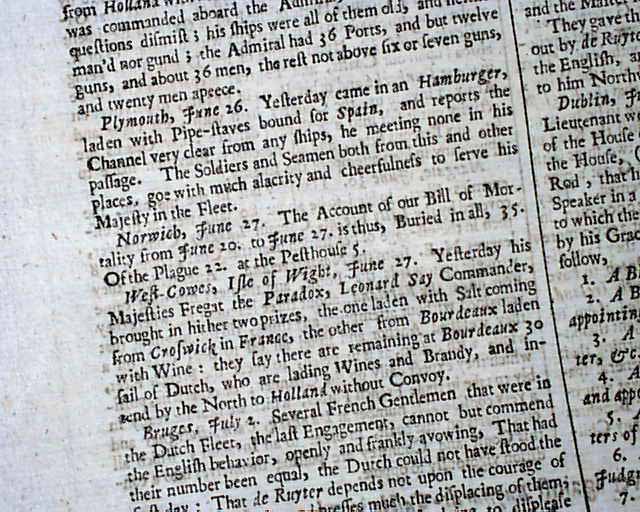 * Earliest of newspapers to be had
* The Great Plague

Not only is this a very early issue (number 66) but it is from this significant year when the Great Plague was ravaging much of Europe, including England, and is also just two months before Great Fire of London.
Relating to the Plague, printed on the front page is a death report from the town of Norwich in England which notes: "The Account of our bill of Mortality from June 20 to June 27 is thus. Buried in all 35, of the Plague 22, at the Pest house 5."  Any period newspapers with mention of the Great Plague are very desired and increasingly difficult to find.
Most of the rest of the issue is taken up with military reports from throughout Europe, including much on the British war with the Dutch with mention of de Ruyter.
Complete as a single sheet newspaper, 7 by 11 inches, very nice, clean condition.

This is the oldest continually published English language newspaper in the world, having begun just the year previous to this published date, and it's still printing today.