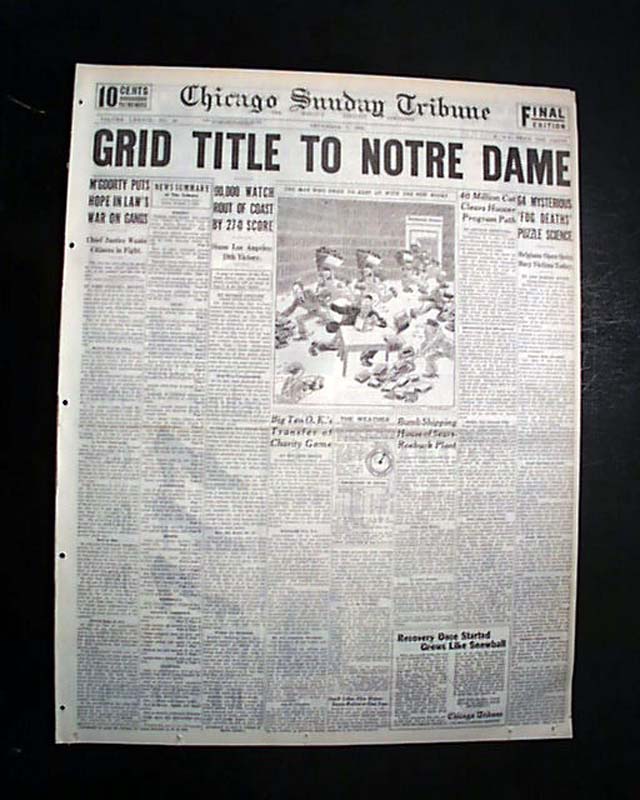 Notre Dame are National Champions in 1930

Here is truly a terrific issue on Notre Dame football. The front page has a great banner headline that announces: "GRID TITLE TO NOTE DAME" with subheads. (see) Unusual for such a nice headline concerning sports on the front page of any newspaper. Rare as such.
The front page of the sport's section (inside) has another nice banner headline: "O'CONNOR STARS AS TROJAN ELEVEN IS CRUSHED" with subheads, nice photo and lineups.
And if that isn't enough, page 3 of this section has a great full page pictorial showing Notre Dame's key players and coach Knute Rockne with banner heading: "They're Hailed as Football's Greatest Players--Here They Are--Notre Dame's Best" (see)
First report coverage on Notre Dame's last game of the 1930 season which made them National Champions for that year. This was also Knute Rocke's last game as head coach. He would be killed in a airplane crash the following spring. This is probably the best issue concerning Notre Dame football that I have ever seen.
Complete Sunday issue with all 70+ pages, including color comics, this is the "rag edition" printed on very high quality newsprint meant for institutional holdings. In great condition as such, a few small binding holes at the spine.