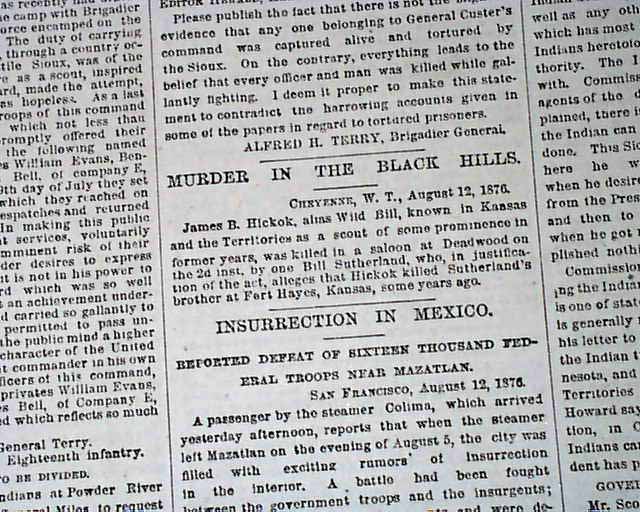 Few events are more legendary from the Old West than the murder of Wild Bill Hickok while playing cards in a saloon in Deadwood, Dakota Territory. And unfortunately, not many newspapers of the day reported the event.
But here is one. A brief and inconspicuous report on page 7 is headed: "Murder In The Black Hills" with the report reading: "James B. Hickok, alias Wild Bill, known in Kansas and the Territories as a scout of some prominence in former years, was  killed in a saloon at Deadwood on the 2nd inst. by one Bill Sutherland, who, in justification of the act, alleges that Hickok killed Sutherland's brother at Fort Hayes, Kansas, some years ago."
. A great Old West item especially since reports of any sort about Hickok's death are very uncommon.
The next column has another nice Old West report with heads: "AFTER THE SIOUX" "General Terry's Arrangements for the March Up the Rosebud" "Thanks to Volunteer Scouts" "Our Braves Left To Die" "Ute Indians to Join Crook--Troops from the Pacific on the Way". Yet another pg. 7 item adds to the Old West theme with: "The Train Robbers" "Confession of Hobbs Kerry as to the Robbery of the Otterville Train..." with a bit more.
Complete in 12 pages, great condition.