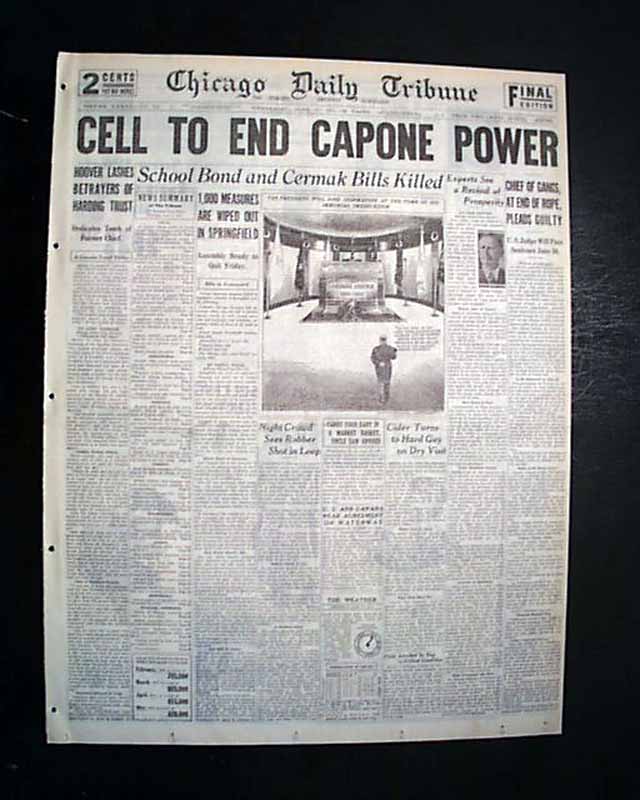 A great and notable headline, particularly for a newspaper from Chicago, home to gangster Al Capone: "CELL TO END CAPONE POWER" with subhead: Chief Of Gangs, At End of Rope, Pleads Guilty" "U.S. Judge Will Pass Sentence June 30."
The article begins: "Al Capone yesterday pleaded  guilty to 8,000 crimes against the prohibition laws and admitted at the same time that he had failed to share his profits, in the form of income taxes, with Uncle Sam..." with much more. The article carries over to page 2 where are found ore column heads: "Capone Called Last Of Great Gang Monarchs" "Prison for Him Viewed as Knell of Super Crime" "End of Gangs' Rule Foreseen Years Ago By Ex-Chief Torrio".
The back page has a sketch of: "When Gang Leader Entered Plea of Guilty In Federal District Court." and a photo of him coming out of a car just before pleading guilty.
Terrific to have this report in a Chicago newspaper, home to so much of the gangland activity during the Prohibition era.
The complete 36 page issue. This is the "rag edition" printed on very high quality newsprint meant for the requirements of institutional holdings consequently in great condition. Four small binding holes at the blank spine.