Home > Back to Search Results > Freedom of the Press goes to Supreme Court...
Click image to enlarge 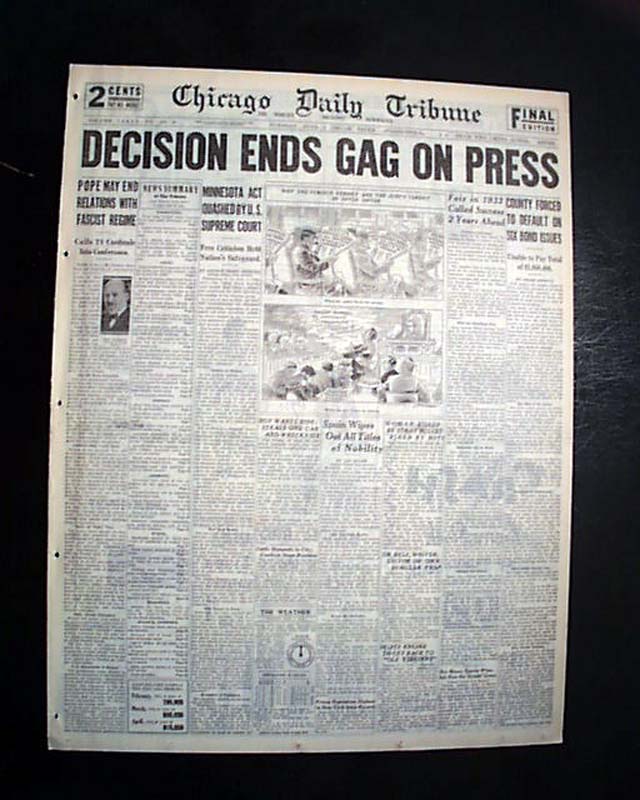 Freedom of the Press goes to Supreme Court...

* Near vs. Minnesota re. freedom of the press
* Landmark United States Supreme Court decision
* Great headline for display

The the front page has a nice banner headline: "DECISION ENDS GAG ON PRESS" with subheads. (see) Lengthy text continues inside with photos of the Supreme Court justices. First report coverage on the Near v. Minnesota landmark United States Supreme Court decision.
Complete with 38 pages, this is the "rag edition" printed on very high quality newsprint meant for institutional holdings. In great condition as such, a few small binding holes at the spine.

wikipedia: Near v. Minnesota was a landmark United States Supreme Court decision that recognized the freedom of the press by roundly rejecting prior restraints on publication, a principle that was applied to free speech generally in subsequent jurisprudence. The Court ruled that a Minnesota law that targeted publishers of "malicious" or "scandalous" newspapers violated the First Amendment to the United States Constitution (as applied through the Fourteenth Amendment). Legal scholar and columnist Anthony Lewis called Near the Court's "first great press case".