Home > Back to Search Results > The New England Restraining Act... Thanks to Patrick Henry for resolving the Gunpowder Incident...
Click image to enlarge 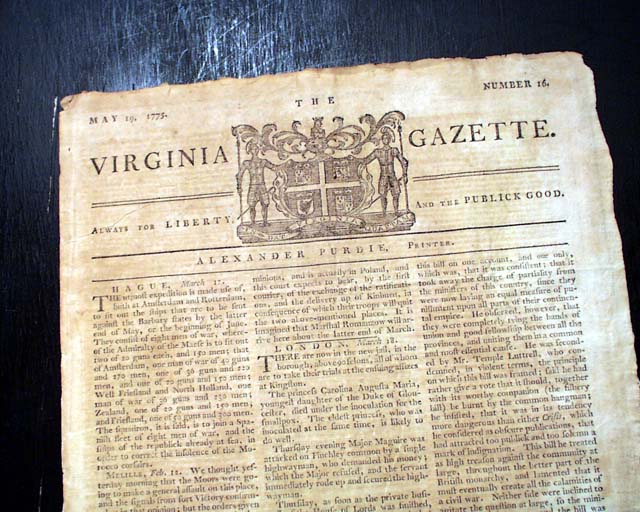 The New England Restraining Act... Thanks to Patrick Henry for resolving the Gunpowder Incident...


VIRGINIA GAZETTE, Williamsburg, May 19, 1775  This newspaper was published by Alexander Purdie, a distinction to be made since there were three newspapers of this title printed in Williamsburg during the early period of the Revolutionary War. A very rare opportunity for a scarce title from colonial Virginia.

A great issue with the best content found in the four page "Supplement" issue which is attached. The full front page and half of page 2 of the Supplement contain the full text of the historic New England Restraining Act. This Act limited the export and import of any goods to and from only Great Britain & also prohibited the New England colonies from fishing in the waters off Newfoundland and most of America's Atlantic coast without permission, imposing stiff penalties if violations occurred. Needless to say this Act was hated by the colonists. It is our experience that this Act was rarely printed in full in period newspapers.
Other fine content in the Supplement as well, including a report dated April 21 noting: "...favoured us with the following accounts: That his Excellency General Gage has published a manifesto forbidding the troops under his command to injure or insult such of the inhabitants of Boston as are peaceable, on pain of death...that all intercourse between Boston and the country was prohibited...". Keep in mind that the dateline was 2 days after Lexington & Concord.
A report from London mentions in part: "...greatest reason to expect a speedy settlement of the present unhappy disputes...a meeting of near 8000...to consider measures to be pursued in the present critical situation of the affairs of America...". Also mention of the arrival of Ben Franklin in London, to be an agent for the Mass. government.
Pages 3 & 4 of the Supplement contain no less than 6 address of counties in Virginia essentially thanking Patrick Henry & others for their efforts in resolving the Gunpowder Incident. One of the reports mentions in part: "...from the spirited behaviour of Captain Patrick Henry & the other officers and gentlemen soldiers of the volunteer company of Hanover, in procuring satisfaction for the gunpowder taken out of the colony's magazine, beg leave to return them our most hearty thanks." The others read similarly.
Keep in mind that the Gunpowder Incident was a local Williamsburg event, and as such received little press attention outside of Virginia.
Page 3 of the regular issue has a great address: "To All The Good People of VIRGINIA" which begins: "We his Majesty's faithful subjects, the Council of this colony...can no longer forbear to express our abhorrence & destination of that licentious & ungovernable spirit that is gone forth & misleads the once happy people of this  country..." with more (see).
The four page regular issue plus the four page Supplement for a total of 8 pages. Very handsome engraving in the masthead, never-trimmed margins, very nice condition.