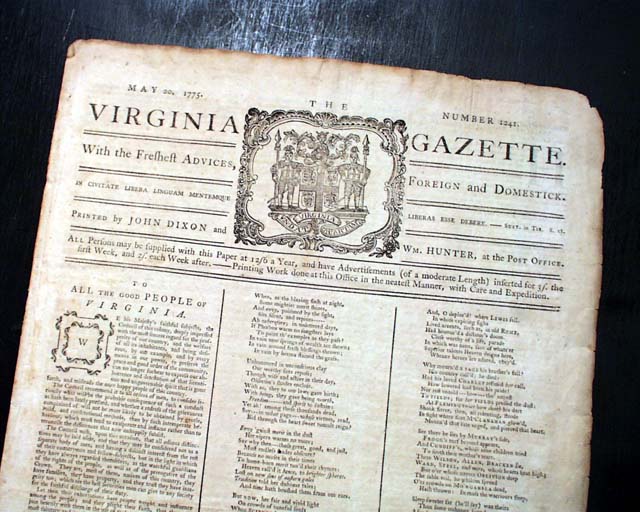 THE VIRGINIA GAZETTE, Williamsburg, May 20, 1775  This newspaper was published by Dixon & Hunter, a distinction to be made since there were three newspapers of this title printed in Williamsburg during the early period of the Revolutionary War. A very rare opportunity for a scarce title from colonial Virginia.
And the content is terrific, as page 3 has a great account of the Battle of Lexington & Concord.
Actually there are two accounts. The first is a report via New  York & includes: "This morning a vessel arrived here from Boston by whom we have the following account of the unhappy affair which happened there...On Wednesday morning (the 19th ult.) the grenadiers & light infantry...were ordered to Concord to destroy the magazine there, which they effected. When they arrived within 3 or 4 miles of that place, a body of the provincials was drawn up...Major Pitcairn...desired they would give room for the King's troops to pass; they refused...fired on the detachment, killed one man...on which the troops returned the fire & killed 8 of the provincials The alarm was then given, the country was soon in arms..." with more on this (see).
This is followed y a report prefaced with: "The following account of an attack upon a body of the King's troops, by a number of people of the province of Massachusetts Bay, on the 19th of April, has just been received from General Gage...". The report has considerable detail, beginning: "General Gage having received intelligence that a considerable magazine of military stores was forming at Concord, for an army which was to assemble there in order to act against his Majesty & his government, thought proper to order the grenadiers & light companies of the regiments at Boston...to march to the town of Concord..." with more detail on the shots fired, etc. Then: "...As the party under  Major Pitcairn advanced towards Lexington...when the party reached the end of the village, they discovered about 200 men under arms & drawn up on a green who waited till the troops came within about 100 yards of them & then filed off to the right...Major Pitcairn called out to them not to fire...fired from behind them four or five shot at the troops..." with much more (see for the full report).
Page 3 also has a nice item from New York noting in part "...arrived here from the eastward on their way for Philadelphia to attend the Continental Congress, the Hon. John Hancock...Samuel Adams, John Adams, and Robert Treate Paine...were met a few miles out of town...escorted into the city by near a thousand men under arms...Their arrival was announced by the ringing of bells & other demonstrations of joy...".
As if all this is not sufficient for one issue, the terrific content continues with a complete printing on pages 2 & 3 of the historic New England Restraining Act. This Act limited the export and import of any goods to and from only Great Britain & also prohibited the New England colonies from fishing in the waters off Newfoundland and most of America's Atlantic coast without permission, imposing stiff penalties if violations occurred. Needless to say this Act was hated by the colonists. The lengthy text of this Act takes nearly two-thirds of a page.
It is our experience that this Act was rarely printed in full in period newspapers.
And as if to set the stage for what is found within this issue, the front page begins with a great address: "To All The Good People of VIRGINIA" which begins: "We his Majesty's faithful subjects, the Council of this colony...can no longer forbear to express our abhorrence & destination of that licentious & ungovernable spirit that is gone forth & misleads the once happy people of this  country..." with more (see).
Four pages, never-trimmed margins, very handsome engraving in the masthead, very nice condition. 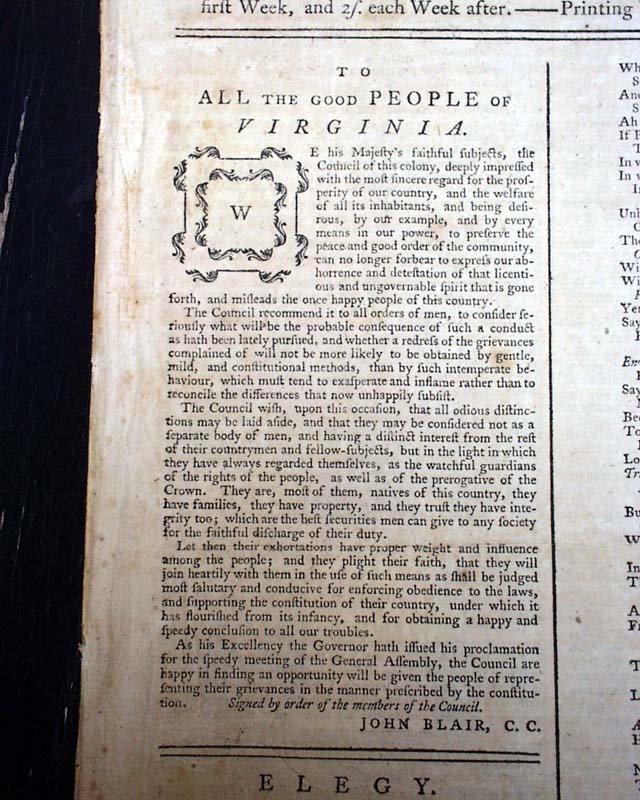 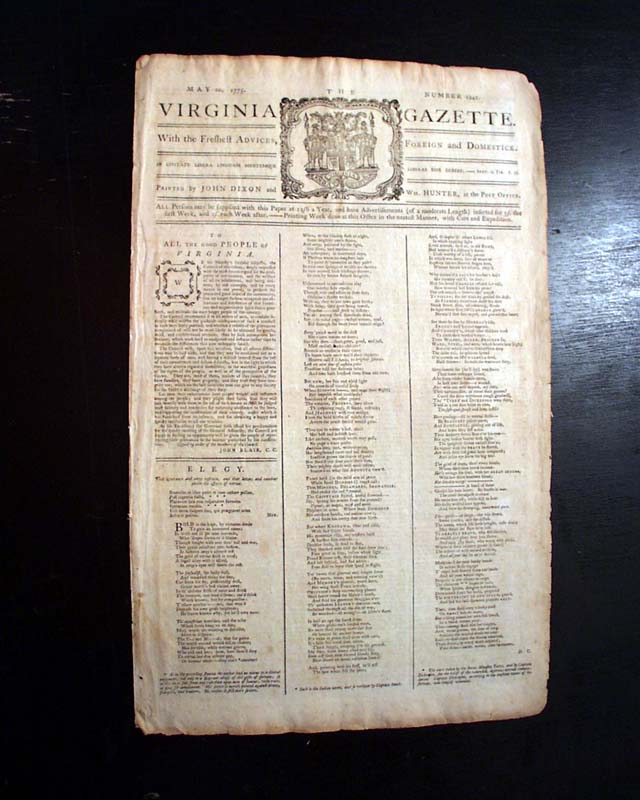 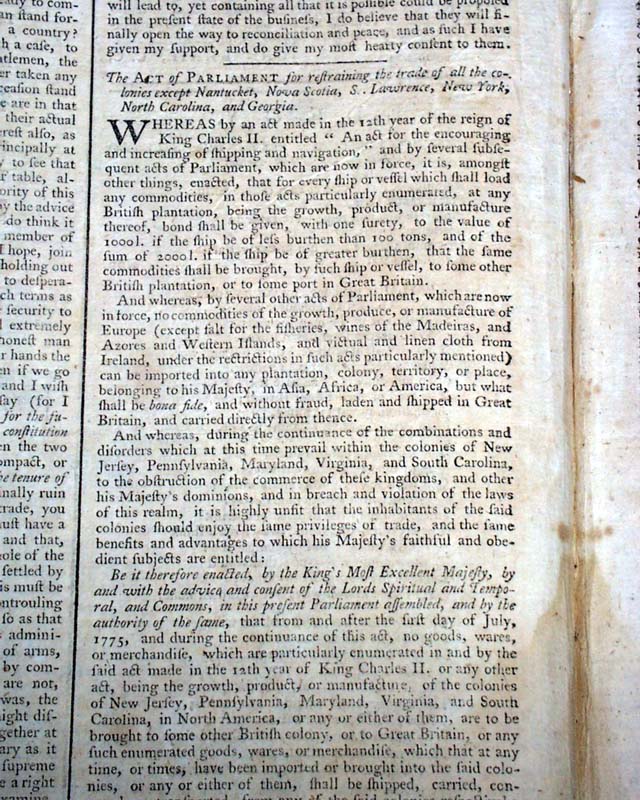 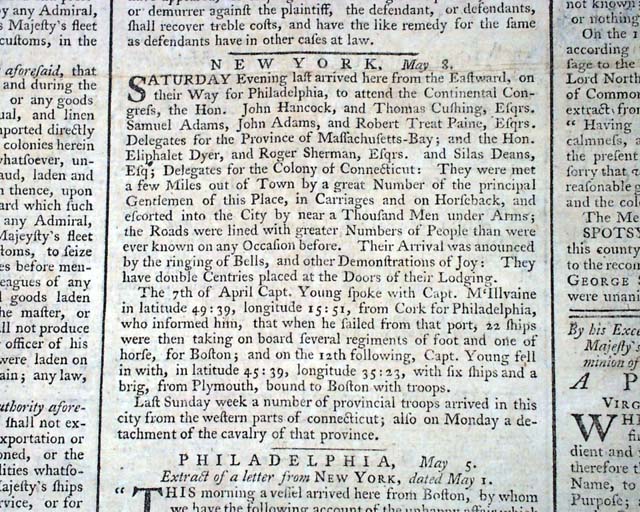 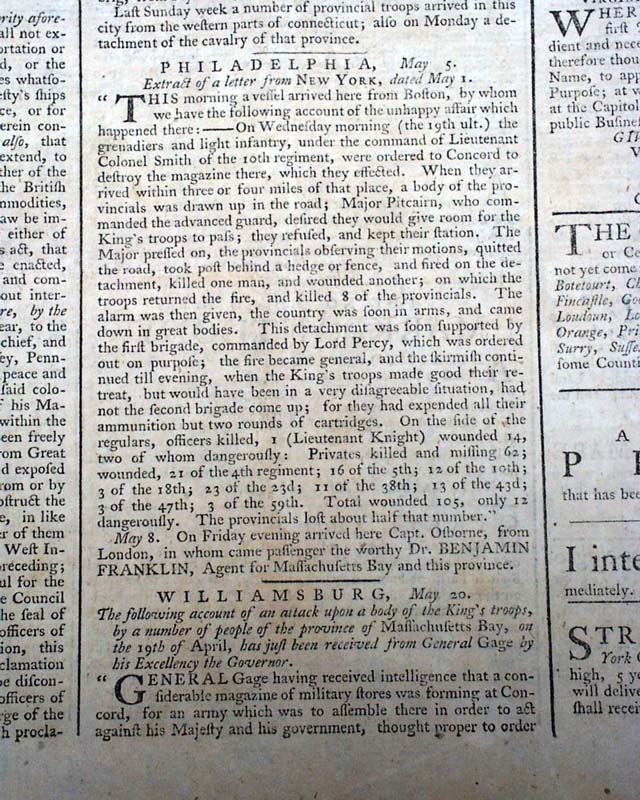 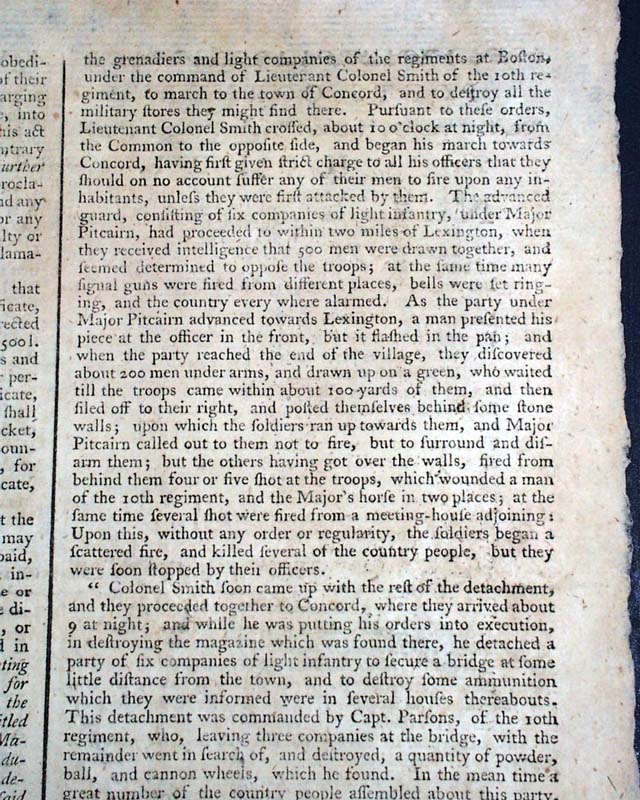 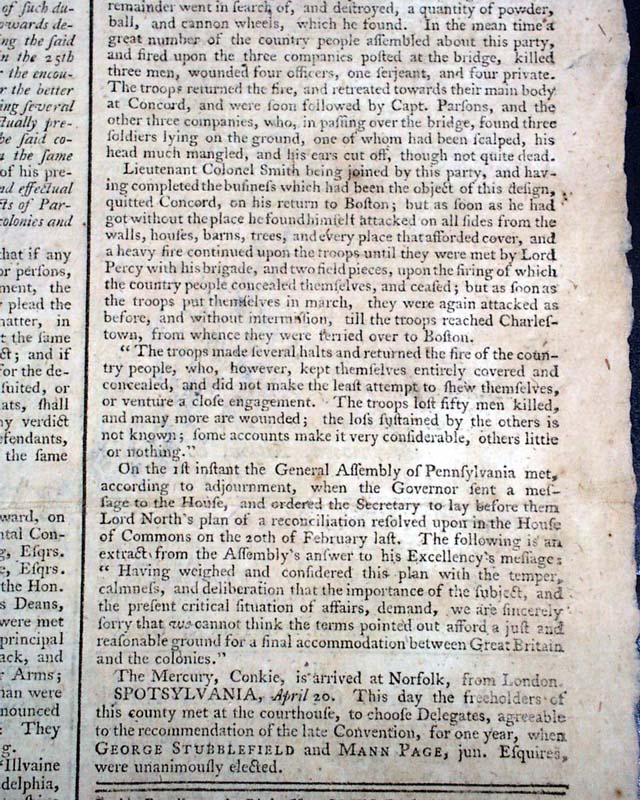 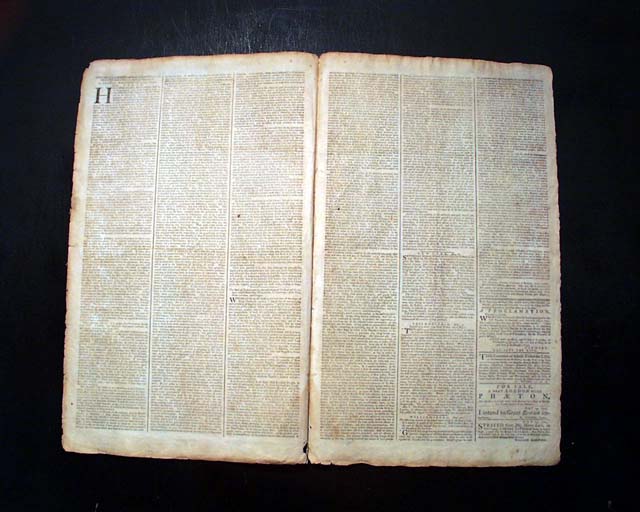 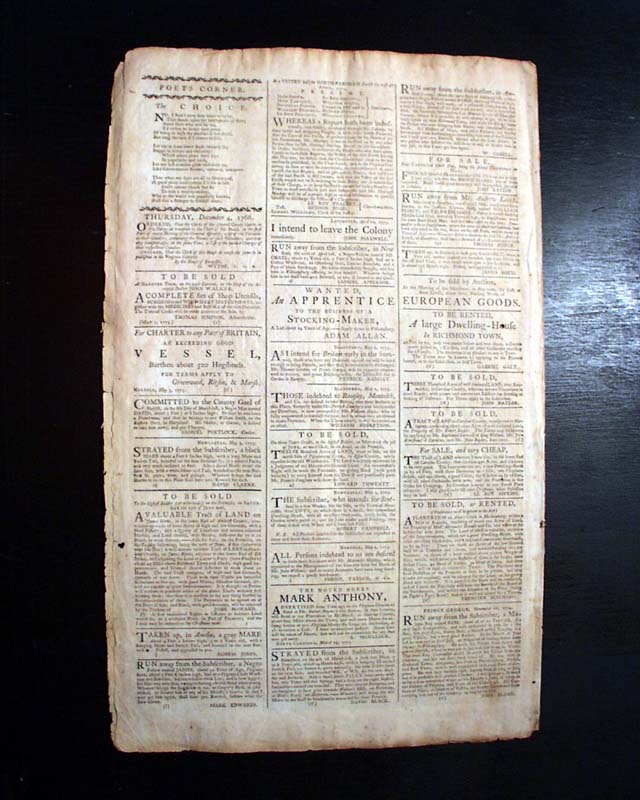