Home > Back to Search Results > Huge print of Newport, Rhode Island, from 1873...
Click image to enlarge 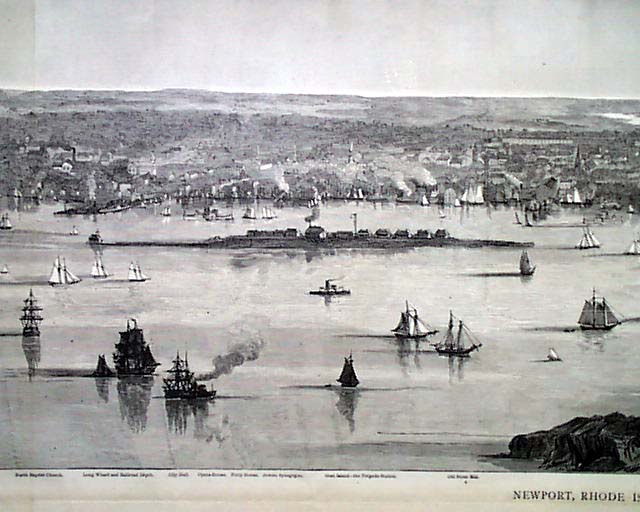 * Huge print of Newport, Rhode Island
* Much on the history of Newport

Offered is a huge foldout (actually the Supplement of the Harper's Weekly for this date) with a terrific view of "Newport, Rhode Island," showing how the skyline looked in 1873, and which includes many sail boats & ships in the harbor (see photos).
Newport was one of the most popular summer tourist locations on the East Coast during the latter half of the 19th century. Several buildings & other landmarks are noted above & below the print, and there is descriptive text on the town as well.
Among the landmarks noted are "Jewish Synagogue", "Opera House" "City Hall" "Cliff Walk & Cottages" "Castle Hill" "Masonic Hall" and many churches among other buildings.
This foldout is blank on the reverse, measures about  22 1/2 by 32 inches with the actual print of Newport measuring about 9 1/2 by 31 inches. The issue will be shipped as we received it - folded at the mid-fold as shown in the last two images.
The Supplement typically goes for more than this price, but a few slight imperfections (small non archival mends, edge chipping, slight browning at the fold) allow us to price it at just under $100. See images for details on condition.
The regular issue for this date (excluding the Supplement) is also available at: Harper's Weekly, August 30, 1873.