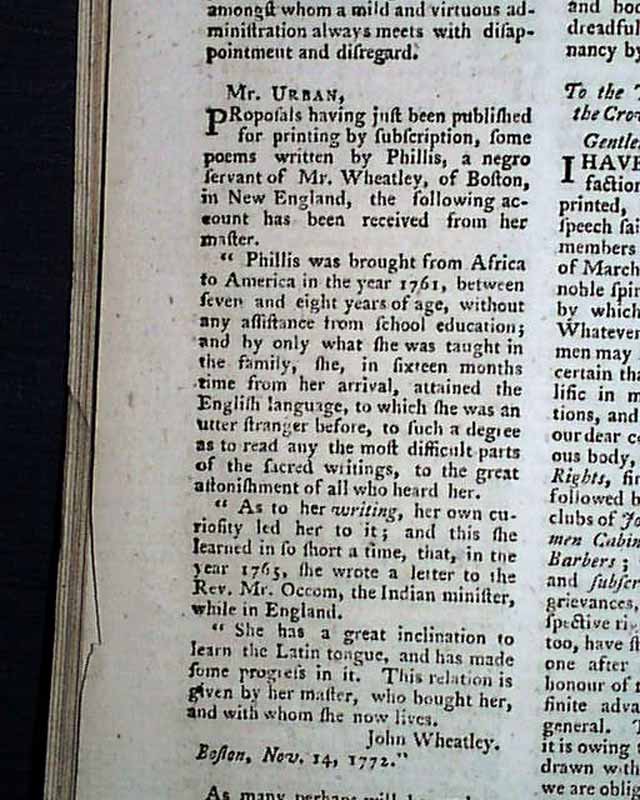 Item # 654917 GENTLEMAN'S MAGAZINE, London, May 1773  Certainly the most significant item in this issue is the great article: "Some Account of Phillis, a Learned Negro Girl" which is a letter to the publisher stating: "Proposals have just been published for printing by subscription, some poems written by Phillis, a negro servant of Mr. Wheatley, of Boston, in New England, the following account has been received from her master...". Hereafter is an account of Phillis Wheatley, reading, in part: "Phillis was brought from Africa to America in the year 1761...she in sixteen months time...attained the English language....As to her writing, her own curiosity led her to it...", signed in type: John Wheatley.
What follows is an account verifying Phillis as the author, noting: "...an attestation has been procured...that 'the poems there specified were...written by Phillis, a young negro girl who was but a few years since brought an uncultivated barbarian from Africa & has been, and now is, under the disadvantage of serving as a slave in a family in Boston..." with more (see). This is one of the better items on the famed Phillis Wheatley.
A wide variety of other content in this issue plus recent news of the day near the back under the "Historical Chronicle". Included are both plates called for, one a nice photocopied foldout titled: "A General Plan of the Several Canals Given in the Course of this Magazine" showing the Southeastern portion of England (see).
Complete in 52 pages, full title/contents page with an engraving of St. John's Gate, measures 5 by 8 1/4 inches, very nice, clean condition.

A very nice magazine from the "mother country" just before the beginning of the Revolutionary War with a wide range of varied content. This was the first periodical to use the word "magazine" in its title, having begun in 1731 and lasting until 1907.