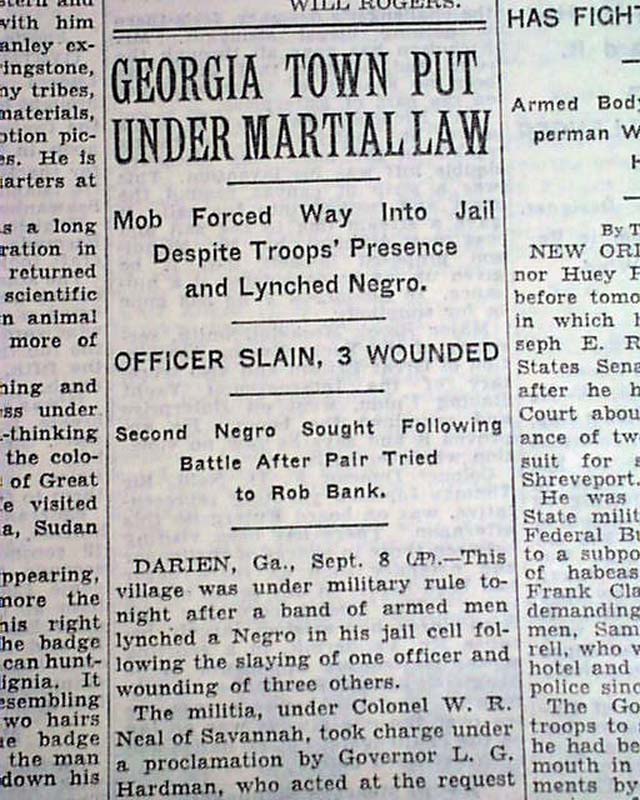 Page 29 has one column headings that include: "GEORGIA TOWN PUT UNDER MARTIAL LAW" "Mob Forced Way Into Jail Despite Troops' Presence and Lynched Negro" and more. (see) First report coverage on the lynching of Negroes George Grant & Willie Bryan at Darien, Georgia. Always nice to have notable events in history reported in this World famous publication.
Other news, sports and advertisements of the day. Complete in 56 pages, this is the rare rag edition that was produced on very high quality newsprint, with a high percentage of cotton & linen content, allowing the issues to remain very white & sturdy into the present. Given the subscription cost, libraries & institutions rather than individuals were the primary subscribers of these high-quality editions. Very nice condition.

wikipedia notes: In 1930, two African-American men, George Grant and Willie Bryan, were lynched by a mob of Darien's residents in the Darien Jail due to the death of Police Chief Robert L. Freeman and the wounding of Deputy Collins while trying to capture the two men after a robbery at the Darien Bank. The town was put under Martial Law by Colonel W.R. Neal with the Georgia Militia in response to the mob.