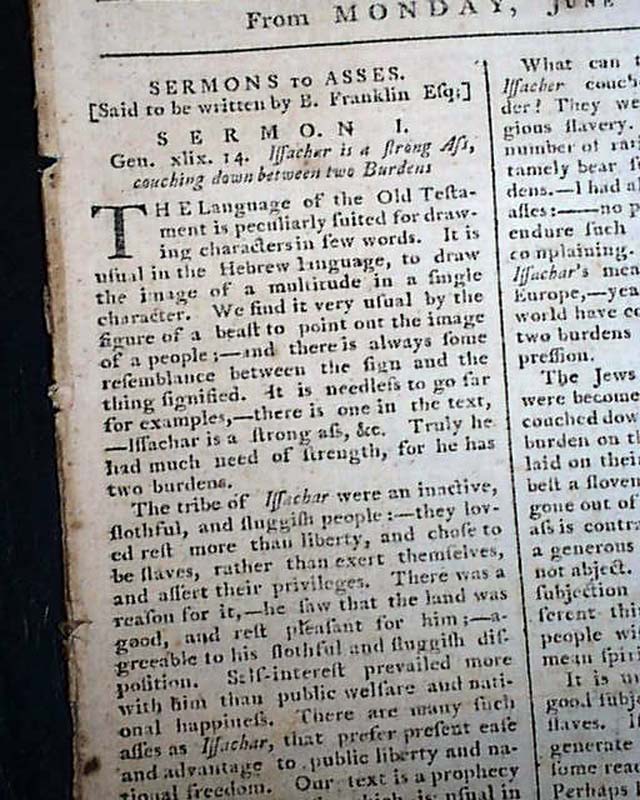 Patriots complain of taxation without representation...

The entire front page is taken up with "Sermons to Asses--Said to be written by B. Franklin Esq." but in fact it was not written by Ben Franklin. This sermon carries over thru pages 2, 3, and 4.
Page 5 has a nice report headed "Boston" which notes: "...four of the Commissioners of the Customs...though  proper to retire on board his Majesty's ship Romney...notifications were pasted up at different places of the town requesting the Sons of Liberty to meet next day at ten o'clock at Liberty Hall, under Liberty Tree, on purpose to preserve peace...a flag was displayed on Liberty tree...near 2000 of the inhabitants assembled there...proposed to adjourn to Fanueil Hall...not being large enough to contain one half of the people that attended, they adjourned to the Old south Meeting house where the following petition was read & agreed to..." and what follows is a terrific petition to the governor of Massachusetts containing in part: "that your petitioners consider the British constitution as the basis of their safety & happiness...No man shall be governed by laws not taxed but by himself or representative...In open violation of these fundamental rights of Britons, laws & taxes are imposed on us to which we not only have not given our consent, but against which we have most firmly remonstrated..." with much more on the anger of the Bostonians concerning taxation without representation.
This notable petition the governor responded, beginning: "My office & station make me a very incompetent judge of the rights you claim against acts of Parliament...All I can say is, that I shall not knowingly infringe any of your rights & privileges..." with much more (see).
The following page has another great letter concerning the treatment of the colonists by the British, including a document which includes in part: "After  the repeal of the late American stamp act, we were happy in the pleasing prospect of a restoration of that tranquility & unanimity among ourselves...We have the mortification to observe  one act of parliament after another passed for the express purpose of raising a revenue from  us; to see our money continually collecting from us without our consent..." and much more (see). A terrific document.
Page 7 has a brief report noting: "Wednesday the warehouse of John Hancock, Esq., was broke open; their design was for money, as they took no goods..." with more (see).
Eight pages, 8 1/2 by 10 1/2 inches, minor printing flaw on pg. 3 causes no loss, very nice condition. 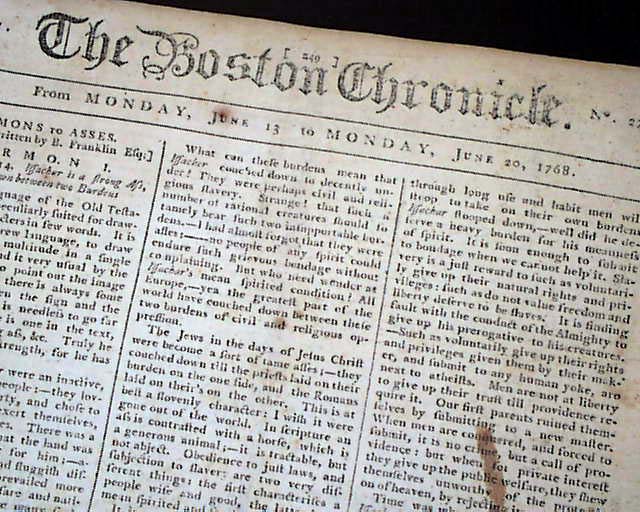 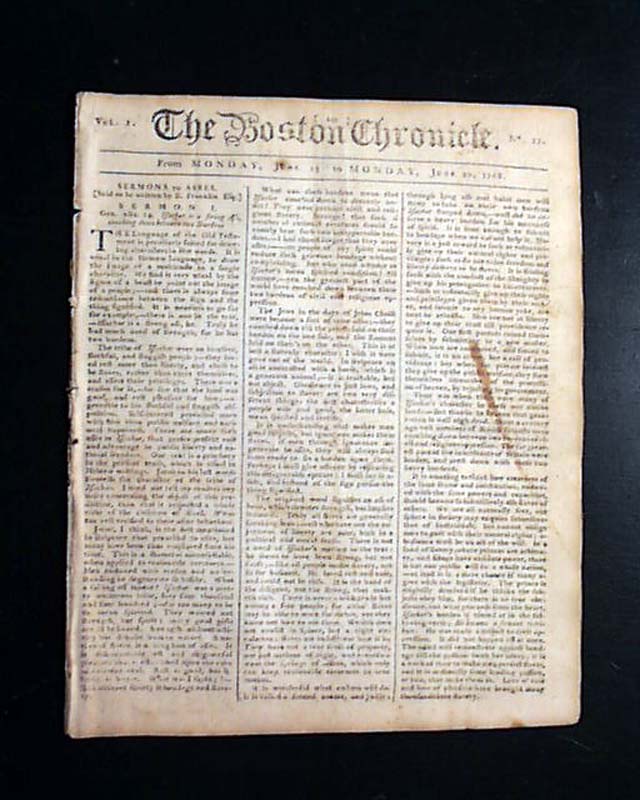 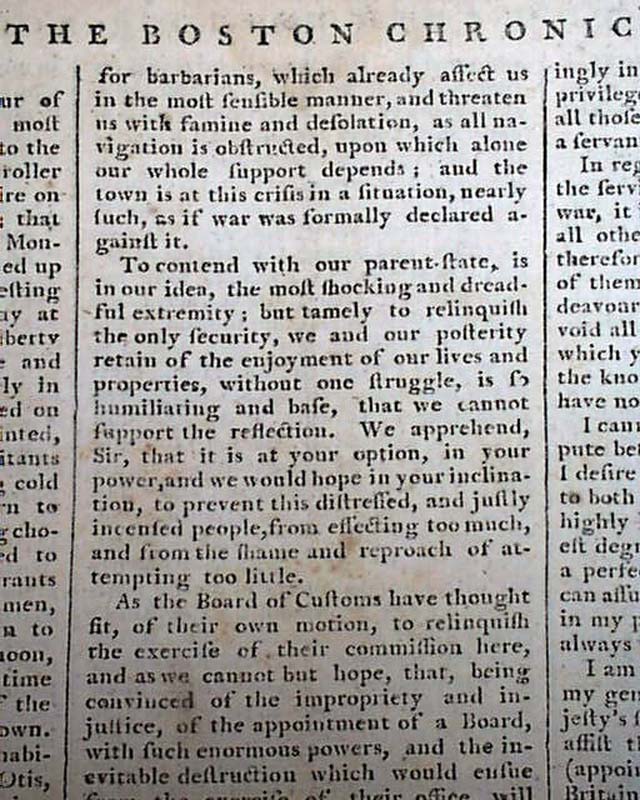 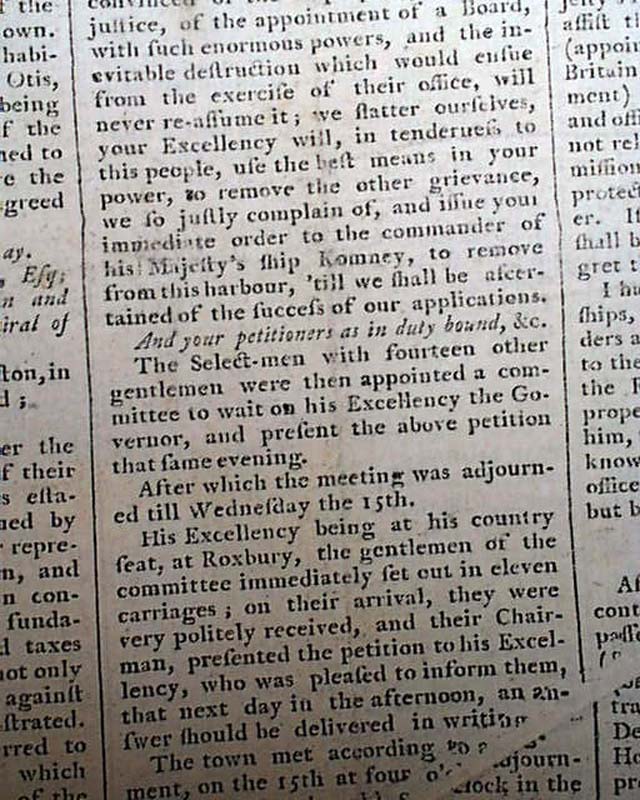 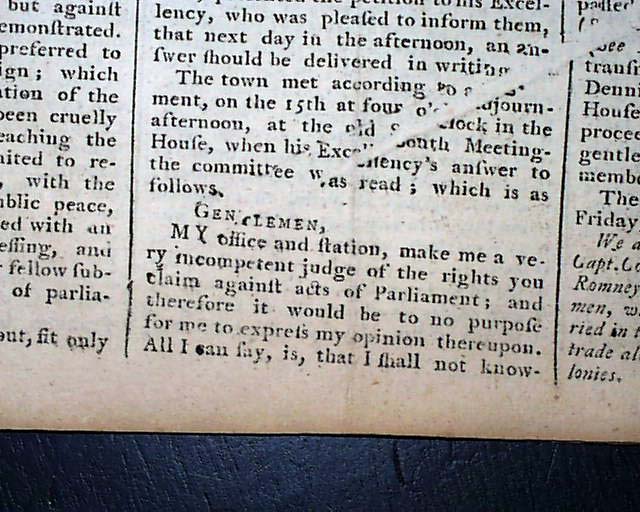 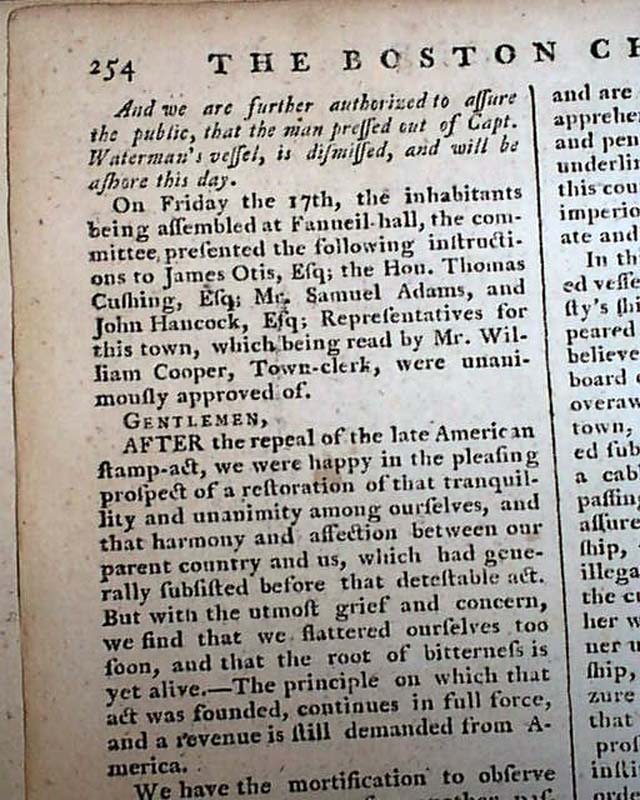 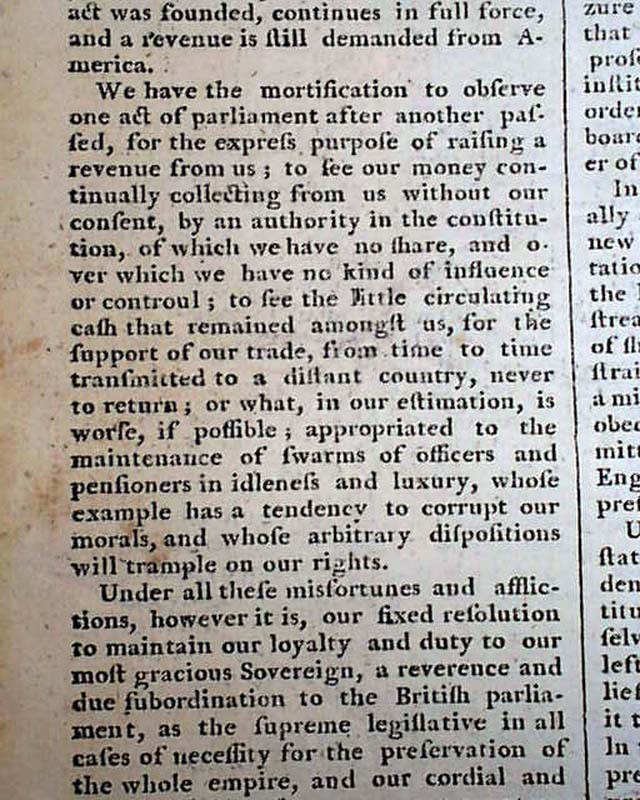 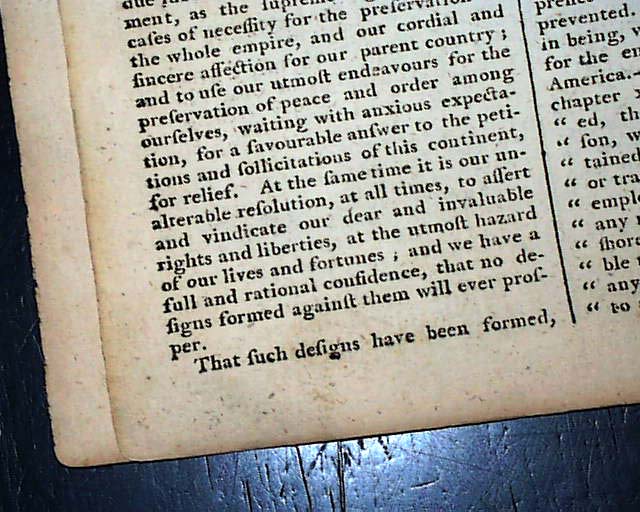 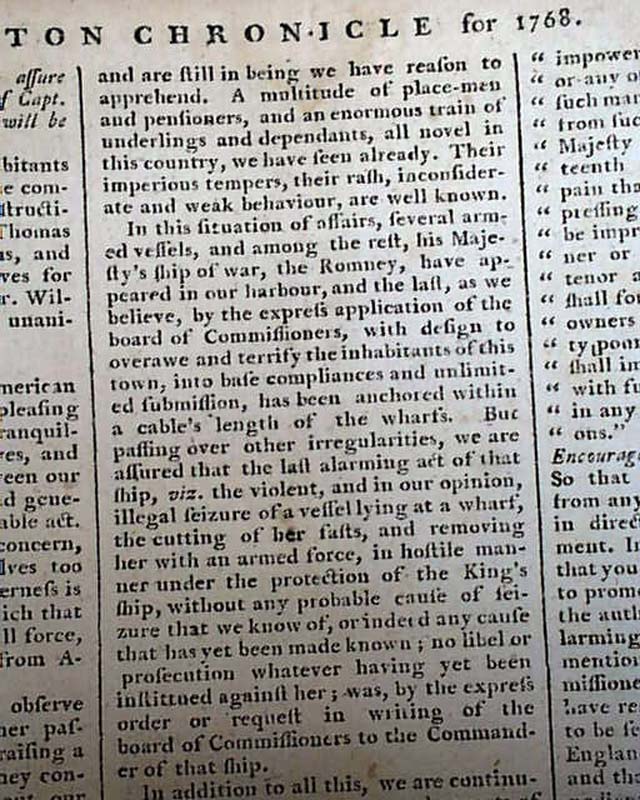 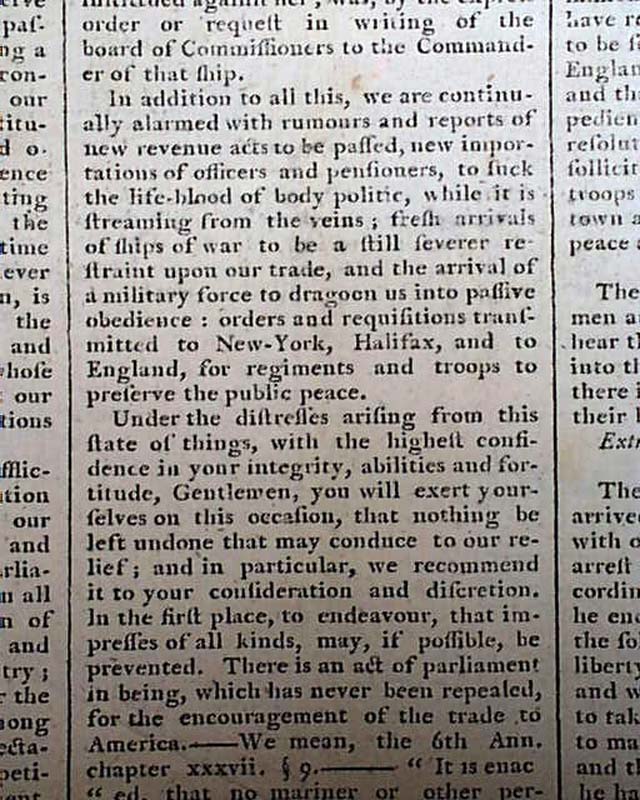 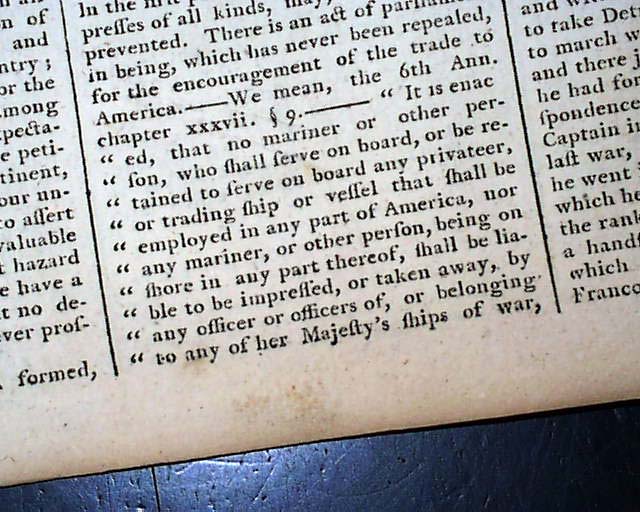 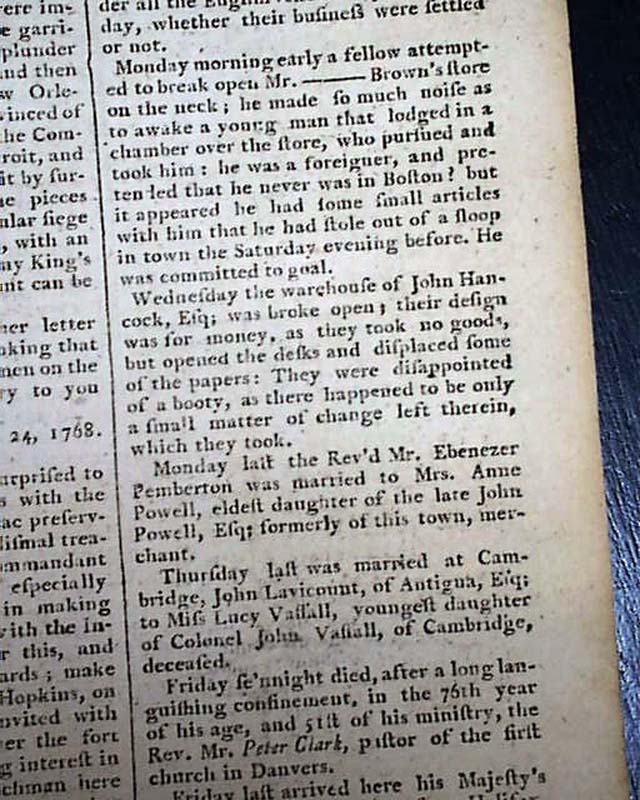