Home > Back to Search Results > Many reports on England giving America her independence... Benedict Arnold can conquer America?
Click image to enlarge 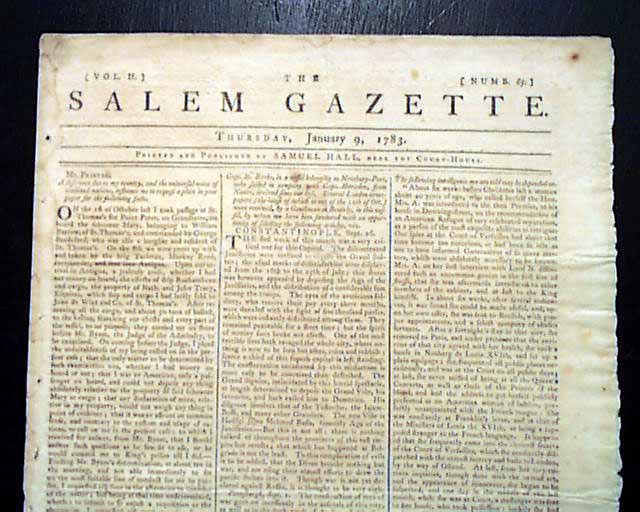 Many reports on England giving America her independence... Benedict Arnold can conquer America?

An issue from at the conclusion of the Revolutionary War and before final details of the treaty of peace were announced in American newspapers.
The front page has some war-related content from London with mention of George Washington. A pg. 2 letter from Philadelphia includes: "...that Congress have received official dispatches from France...advising that Great Britain have granted our Independence & that her commissioners were now fully empowered to treat with the thirteen Independent States..." with more (see). Another report includes: "...that the treaty was signed on the 7th of October by Mr. Adams..." and a letter from London includes: "...by this day an happy & lasting peace would have been effected between this country and America...the Independence of American is absolutely agreed on in Council...on the purport of a general Congress meeting for terminating the war, of which all the powers in Europe seem to be heartily tired." (see) Another pg. 2 item includes: "We are credibly informed that Brigadier General Arnold have given a plan into Lord Shelburne's office for subduing the rebel colonies in America in six months with no other force than 5000 regular troops in addition to the Loyalists now resident in New York. The Provincials and Loyalists at New York...requested of Sir Guy Carleton to furnish them with arms and ammunition in order that they might make their own terms with the rebels...Does the Act of Parliament which authorizes the crown to make peace with America give it authority to declare American independent?..." and more.
Page 3 has an item from Phila. which includes: "...Her dispatches are just come up & I heartily congratulate you on Great Britain's having admitted our Independence by sending Mr. Oswald to Paris...the Rubicon is therefore passed, & I am happy that our expectations are likely to be fulfilled."
Four pages, never-trimmed margins, very nice condition.