Home > Back to Search Results > On the Treaty of Utrecht: France & England come to an agreement...
Click image to enlarge 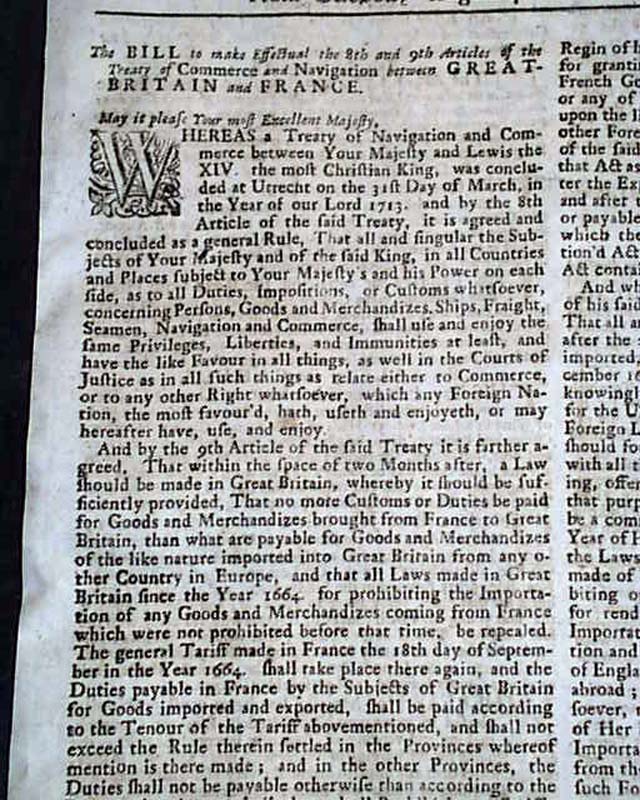 On the Treaty of Utrecht: France & England come to an agreement...

Item # 654535 THE POST-BOY, London, a pair of consecutive issues dated August 6 and 8, 1713 which contain in its entirety: "The Bill to Make Effectual the 8th and 9th Articles of the Treaty of Commerce and Navigation Between Great Britain and France"
This was one of the provisions of the Treaty of Utrecht which was an historic agreement among various European powers, with France being the common party within the various agreements, concluded April 11,1713 at Utrecht in the Netherlands. It is part of the series of treaties which ended the War of the Spanish Succession. British historian G. M. Trevelyan argues: "That Treaty, which ushered in the stable and characteristic period of eighteenth-century civilization, marked the end of danger to Europe from the old French monarchy, and it marked a change of no less significance to the world at large, — the maritime, commercial and financial supremacy of Great Britain."
Given its length and the relative lack of newspapers of the era it is quite difficult to find the complete text in a period newspaper. This event predates the popular magazines which would begin lager in the century and many of the more commonly held newspapers of the 1700's.
A very historic treaty with ramifications throughout both Europe and North America. Each issue is complete as a single sheet newspaper with two decorative engravings in the masthead, red tax stamp, very nice condition.