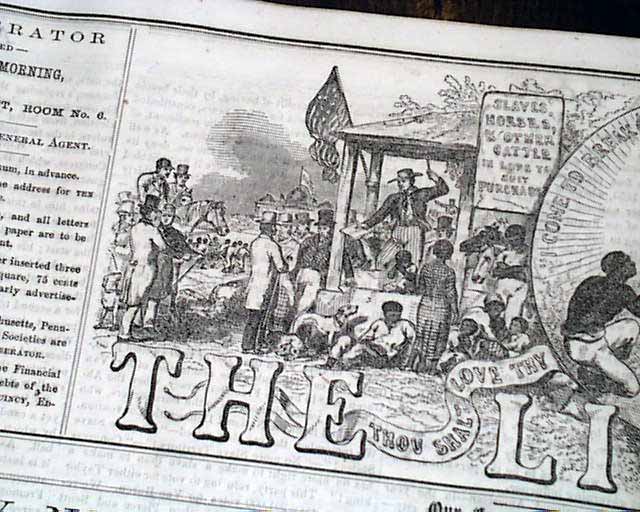 A very famous anti-slavery newspaper published by the noted emancipator William Lloyd Garrison. The ornate engraving in the masthead features three scenes: a slave auction, an image of Jesus breaking the bonds of the oppressors, and a slave family about to depart for their journey to emancipation.
Page 3 has: "The Amnesty Proclamation" "Its Objects Defined" "By the President of the United States, A PROCLAMATION" which re-states his Amnesty Proclamation of December 8, 1863 in which an offer for amnesty was given to those who would swear their allegiance to the government, under several stipulations. This document is signed by him in type: Abraham Lincoln.
Also of interest on page 3 is: "Death of Owen Lovejoy" who was an abolitionist, a Republican member of Congress from Illinois, and a 'conductor' in the Underground Railroad. This report takes three-quarters of a column.
Other items include: "The Bounty to Colored Soldiers" "Cruelty to a Slave In Richmond" "The Abolition Party" & so much more.
Four pages, nice condition