Home > Back to Search Results > Hanging of Nathan Hale...
Click image to enlarge 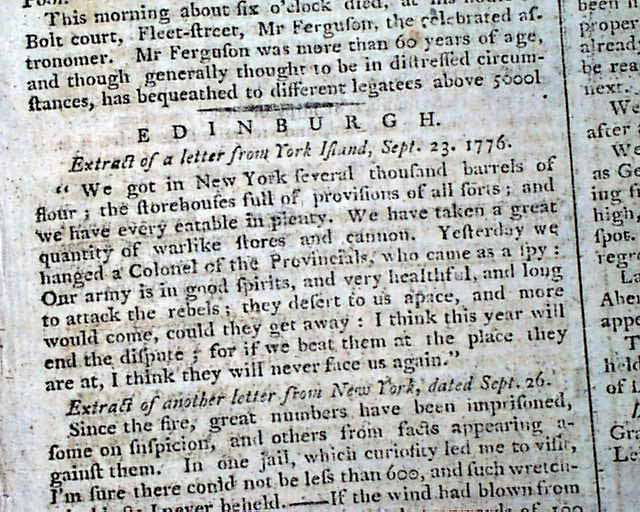 By far the most significant content is found on page 3 as it contains an exceedingly significant--albeit brief & inconspicuous--report of an event known by any student of American history. In a letter dated Sept. 23 from New York is: "...Yesterday we hanged an officer of the Provincials who came as a spy...". Noting that this letter is dated "From New  York Island, Sept. 23", and with the records verifying that Nathan Hale was hanged on Sept. 22 in New  York, it is very obvious that this "officer of the Provincials" was Nathan Hale although not mentioned by name. Hale was, indeed, a spy for the Continental Army having volunteered for an intelligence-gathering mission in New York City before being captured by the British. He is probably best remembered for his purported last words before being hanged: "I only regret that I have but one life to lose for my country." It is my experience that any contemporary newspaper reference to the hanging of Nathan Hale is extremely rare.
Additionally, one-third of the front page is: "An Account of the Soil and Productions of Florida and Louisiana" which carries over to page 2 & concludes in the next issue.
Page 2 has content on the Revolutionary War including: "...That great part of the British troops had re-embarked & proceeded upon an expedition to teh Jerseys in order to drive the rebels from the advantageous post of Perth Amboy...that Lord Percy, with a large body of troops, remained in that city & that advice had just been received of Perth Amboy being taken by a coup de main...A body of six hundred Provincials who were posted in the above town surrendered at discretion. The province of New Jersey is divided into East and West...Perth Amboy is the capital of the East Jersey as Burlington is of the West..." with more. Also on pg. 2: "...letters received from New York some mention that the Congress begin now so far to lower their tone as even to talk of relinquishing their pretensions to independency. This sudden revolution in their ground plan is said to be owing partly to the repeated defeats of their army..." with more.
Nice content on page 3 as well including a letter from New York noting in part: "The rebels are now hiding themselves in their strong holds at King's bridge from whence I hope we shall soon dislodge them..." and another letter noting: "We hear General Burgoyne has an army of 20,000 men, besides Indians, & has boats made to pass Lake Champlain & expect he will soon approach near New York...". .Plus there is the Nathan Hale content as noted above.
Four pages, a small folio-size issue, light dirtiness to the ftpg., minor margin wear, nice condition.

Note: Nathan Hale is remembered for his famous quote: "I only regret that I have but one life to give for my country" , not present within this issue.