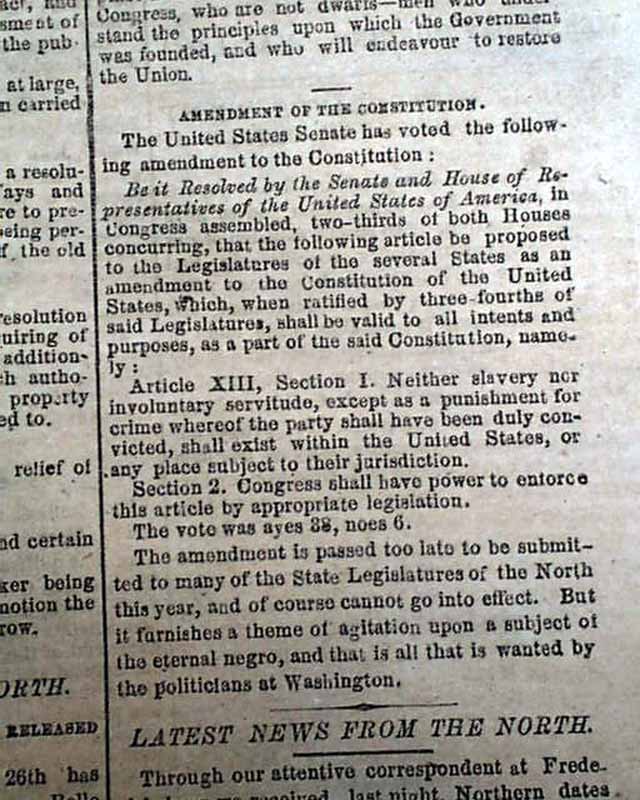 * Thirteenth Amendment to the United States Constitution
* 13th passes U.S. Senate - Abolition of slavery
* From the capital of the Confederacy

A very nice newspaper from the capital of the Confederate States of America. The key content within this issues is found on the back page:  "Amendment of the Constitution", which is the historic Thirteenth Amendment concerning slavery and its passage by the Senate, with the vote noted.
It concludes with a typically Southern editorial comment: "The amendment is passed too late to be submitted to many of the state legislatures...and of course cannot go into effect. But it furnishes a theme of agitation upon a subject of the eternal negro, and that is all that is wanted by the politicians at Washington." Significant having this report in a newspaper from the capital of the Confederacy.
Among the front page items on the war are: "The War News--Grant's Army Moving--The Great Battle at Hand" "Congress" "The Courts" "Highly Important Intelligence--The Cause of Grant's Delay--Probable Activity In Tennessee" "From Northern Virginia--The Yankee Army Moving" "From The Southwest & Trans-Mississippi" "From the Southwest" "The Evacuation of Washington, North Carolina".
The back page has a lengthy editorial which begins: "That the war is still characterized by the barbarities with which it has heretofore been conducted by the enemy; that foreign governments persist in countenancing, if not in aiding that enemy; that in disregard of duty & treaty obligations those foreign governments persist in refusing to recognize our independence; that there is nothing satisfactory to report touching exchange of prisoners...these things are certainly sad to contemplate..." with much more.
Also on the bkpg: "Additional From the North--Prison Lie on Belle Isle--Story of a Released Yankee Prisoner", "The Confederate Congress" and more.
Complete as a single sheet newspaper with a full banner masthead in very nice condition.