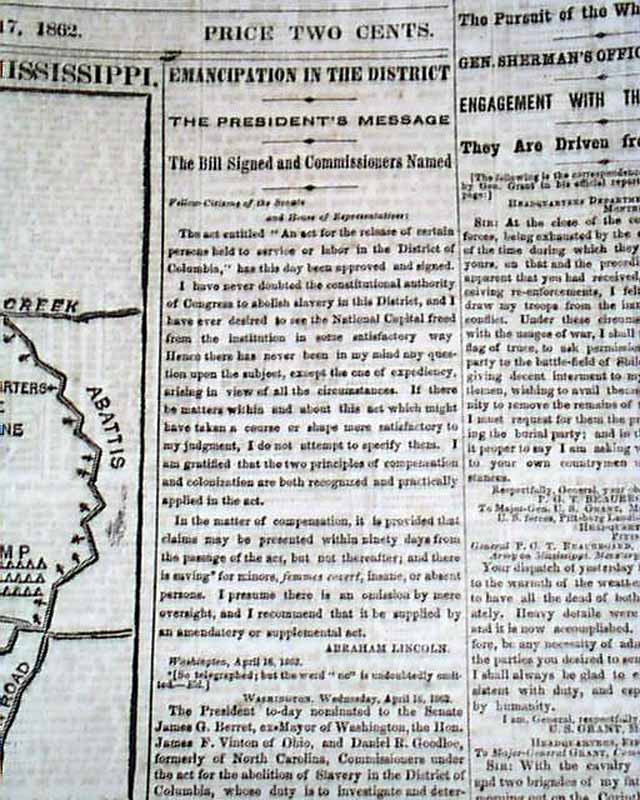 The most noteworthy content is found on the front page: "EMANCIPATION IN THE DISTRICT" which includes: "An act for the release of certain persons held to service or labor in the District of Columbia..." with further particulars. It is signed in  type: Abraham Lincoln.
This Act ended slavery in the nation's capital and compensated both former owners and freed slaves.
The ftg. also has nice column heads on the battle of Shiloh, or Pittsburg Landing as it was also called: "The Battle of Pittsburg" "Beauregard's Flag of Truce" "His Correspondence with Gen. Grant" "The Pursuit of the Whipped Rebels" "Gen. Sherman's Official Report" "Engagement With Their Cavalry" "They Are Driven from the Field". In this significant battle the casualties totaled 24,000 & was considered a Union victory despite suffering more losses. The Union forces are too exhausted to pursue the retreating rebels.
Page 3 contains: "The Battle of Pittsburg" "Official Report of General Grant" "The First Day's Fight a Drawn Battle" "The Rebels thoroughly Beaten on the Second Day" with the text being very detailed and lengthy.
There are two Civil War maps on the front page headed: "Fort Pillow, On the Mississippi" and "The Mississippi From New Madrid to Memphis".
Eight pages, never bound nor trimmed, minimal wear at the fold & magins, a few archival mends inside.