Home > Back to Search Results > Beheading of the King's sister... Washington & relations with Europe...
Click image to enlarge 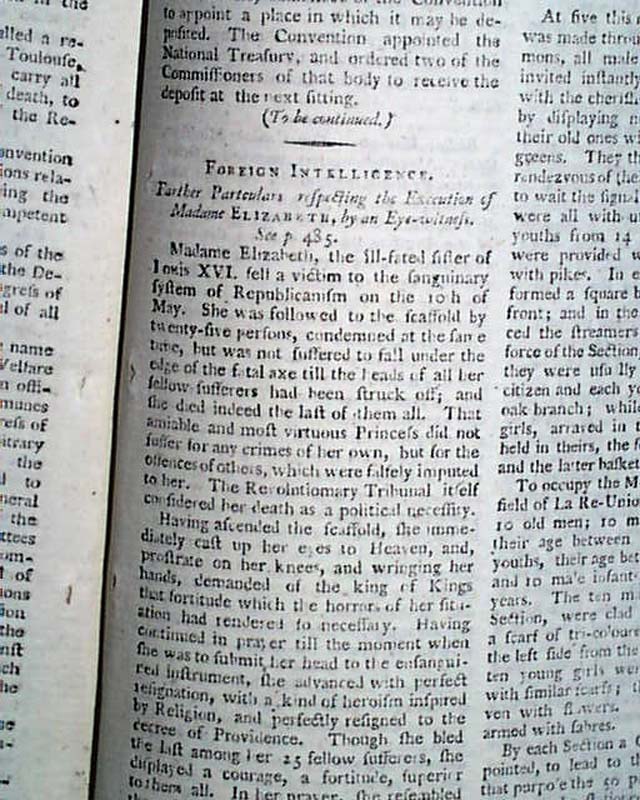 Beheading of the King's sister... Washington & relations with Europe...

Item # 654169 GENTLEMAN'S MAGAZINE, London, June, 1794  Among the three plates present is one which includes a very nice street view of "The Queen's Head" pub in Islington, now a London suburb (see photos). Among the various articles is: "Further Particulars Respecting the Execution of Madame Elizabeth, by an Eye-Witness", beginning: "Madame Elizabeth, the ill-fated sister of Louis XI, fell  victim to the sanguinary system of Republicanism on the 10th of May. she was followed to the scaffold by 25 persons condemned at the same time..." with various details plus other related reports concerning the French Revolution.
Near the back are 1 1/2 pages with reports headed: "American Congress" which includes a statement from the Secretary of State, Edmond Randolph, which is prefaced with a letter of introduction signed by the President: Geo. Washington (see photos).
Included are all 3 plates called for.
Complete in 96 pages, 5 by 8 inches, full title/contents page with an engraving of St. John's Gate, great condition.