Home > Back to Search Results > Was the Dalton Gang wiped out in a gunfight?
Click image to enlarge 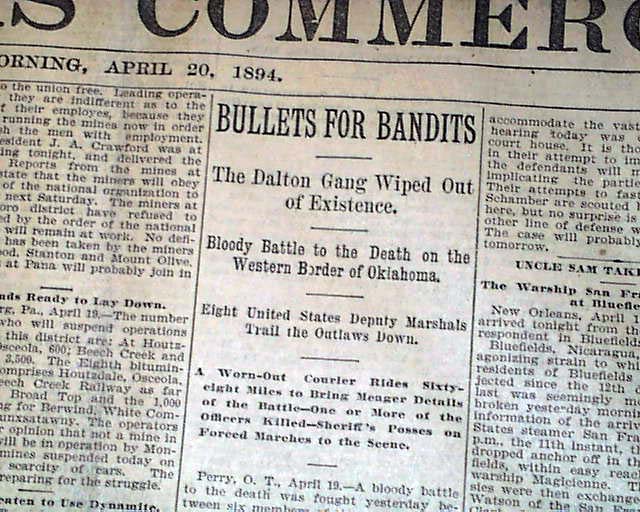 Was the Dalton Gang wiped out in a gunfight?


THE MEMPHIS COMMERCIAL, Tennessee, April 20, 1894  The top of the front page has great column headlines: "BULLETS FOR BANDITS" "The Dalton Gang Wiped Out of Existence" "Bloody Battle to the Death on the Western Border of Oklahoma" "Eight U.S. Deputy Marshals Trail the Outlaws Down" and more (see).
The report begins: "A bloody battle to the dearth was fought yesterday between six members of the notorious Dalton gang of outlaws, headed by Bill Dalton, and a force of deputy U.S. marshals. The bandits were wiped out of existence by the bullets from the Winchesters of the posse..." with much more.
Although a fascinating report, it was untrue. Both Bill Dalton &  Bill Doolin died in 1896.
Eight pages, evenly toned, a few disbinding indents at the spine, nice condition.