Home > Back to Search Results > Declaration & Resolves opposing the Coercive Acts... Text of the Continental Association...
Click image to enlarge 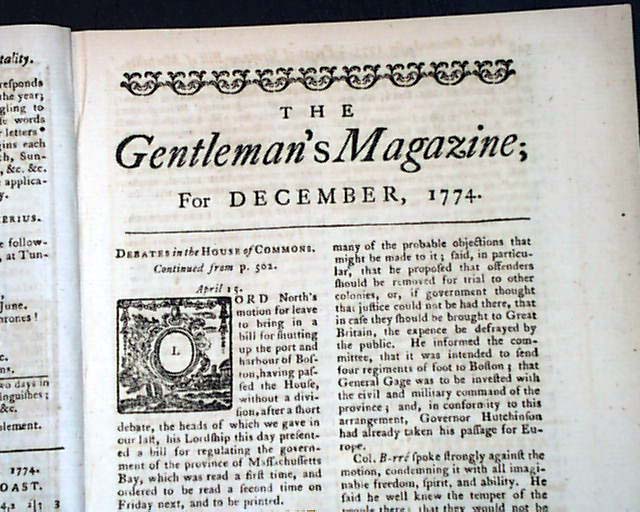 Item # 654037 GENTLEMAN'S MAGAZINE, London, Dec., 1774  The issue begins with the details of the "Debates in the House of Commons" on the Coercive Acts levied against the rebellious Mass. colony (recent Boston Tea Party) with specific mention of the Boston Port Bill, the Mass. Government Act, and the Administration of Justice Act. Quite detailed reporting of the discussion in Parliament taking the first 5 1/2 pages, with more than one reference to the hated tea tax.
Inside: " Proceedings of the American Colonists" has the text of the historic "Declaration & Resolves of the First Continental Congress" (aka 'Declaration of Colonial Rights') in response to the hated "Intolerable" Acts by Congress. It begins: "That the inhabitants of the English colonies in North America...have the following rights..." the first resolution stating: " That they are entitled to life, liberty, and property; and have never ceded, to any sovereign power...a right to dispose of either without their consent." The remaining resolves follow, outlining the rights of the colonists. This report takes 2 pages.
This is followed by yet another very significant document, the Continental Association in which the congressional delegates agree to implement a non-importation policy & embargo all exports to England. Included are all 14 points, the first including: "That after the first day of December next, we will import no British goods, wares, or merchandize whatsoever...".
A trio of very notable reports from this significant year before the outbreak of war. Included also are both full pages plates called for (see).
Complete in 56 pages, 5 1/2 by 8 1/2 inches, full/title contents with a woodcut of St. John's Gate, very nice, clean condition.