Home > Back to Search Results > Commenting on the Battle of Murfreesboro...
Click image to enlarge 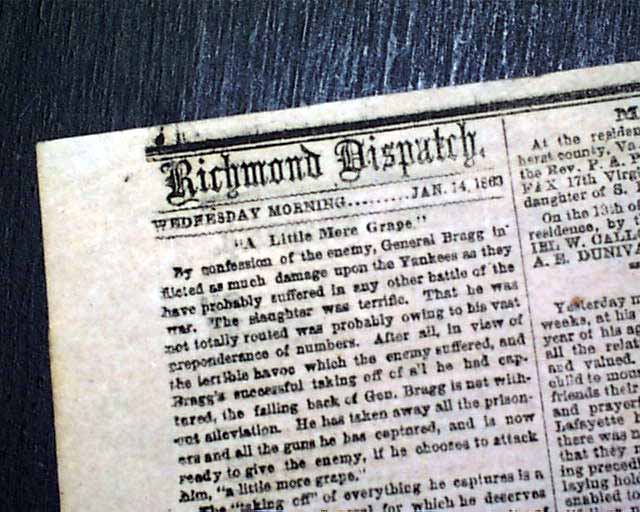 Commenting on the Battle of Murfreesboro...

Among the front page reports are: ""Congress Yesterday", "Affairs In The Valley", "Yankees Threatening the Virginia & Tennessee Railroad", "Confederate States Congress", "Northern News", "The Platform of Lincoln's Administration--The New Abolition Pronouciamento", "The Intervention Scheme", "From the Battle Field" and more.
The back page has a bit of news but is mostly taken up with advertisements. One item begins: "By confession of the enemy, General Bragg inflicted as much damage upon the Yankees as they have probably suffered in any other battle of the war. The slaughter was terrific..." which is in reference to the Battle of Murfreesboro.
Complete as a single sheet issue, a bit close-trimmed at the lower right affects only 2 ads, generally nice condition.