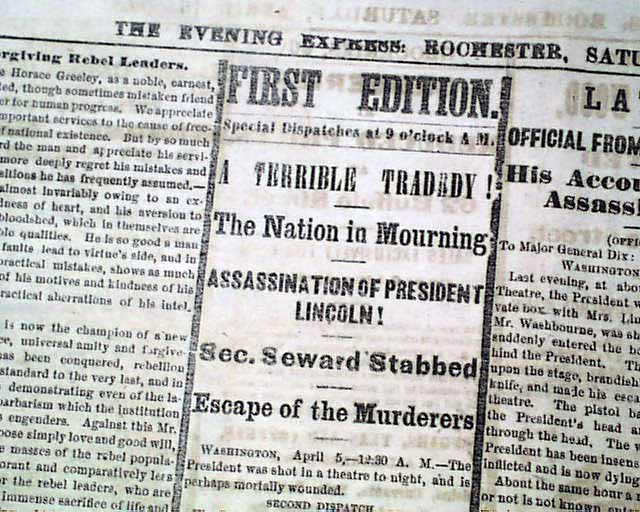 Always among the issue in most demand is the first report of Abraham Lincoln's assassination. Here is a good one.
All columns on all 4 pages are black-bordered, with most of the Lincoln coverage found on page 3. Some rather dramatic column heads including: "A TERRIBLE TRAGEDY!" "The Nation in Mourning: "Assassination of President Lincoln!" "Sec. Seward Stabbed" "Escape of the Murderers".
And then under: "LATER!" is: "Official From Sec. Stanton" "His Account of the Assassination" with good text, and then: "STILL LATER!" "DEATH OF THE PRESIDENT" "He Died at Half-Past 7 This Morning" "The Murder Planned On the 1st of March" "Wilkes Booth, the Actor, One of Them".
Even more column heads including: "The Great Tragedy" "Last Hours of President Lincoln" "Particulars Of His Decease" "A Cabinet Meeting Held in the Death Chamber" "Inauguration of President Johnson" "The Arrest of Booth Not Confirmed" and even more.
Page 3 has a lengthy editorial headed: "Oh, Mournful Day!" which begins: "This great nation has been struck to the heart with profound grief...".
Complete in 4 pages, never bound nor trimmed, several archival mends are quite discrete. There is some wear loss at folds but not affecting any Lincoln content. Close-trimmed at the bottom of page 3 causes to the last 1, 2 or 3 lines of 3 columns which does affect a bit of Lincoln content. Some damp staining as well.
A quite dramatic issue with these nice column headlines.