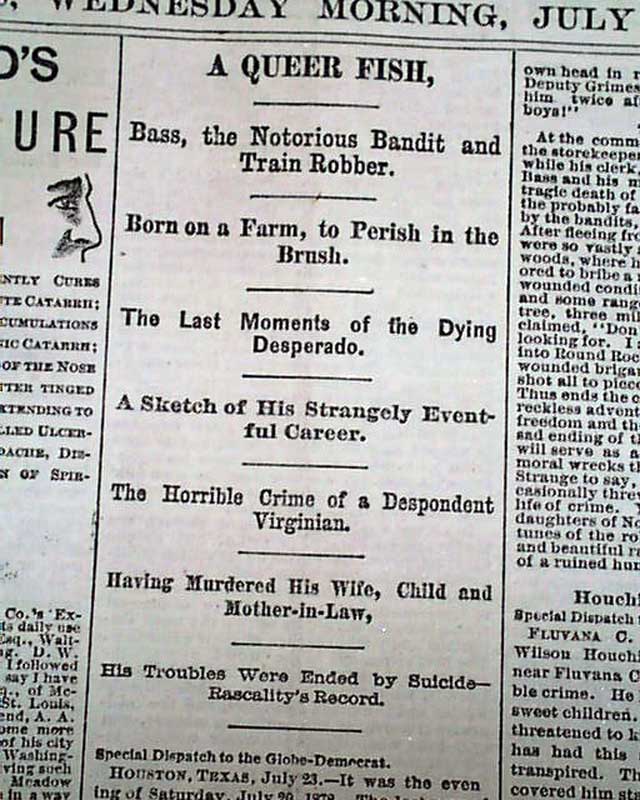 Looking over the several reports on the death of outlaw Sam Bass we have offered over the last ten years, none have come close to providing the detail & presentation found in this issue.
Taking the entire middle column of the front page (and a bit of the next) is a great account headed: "A QUEER FISH" "Bass, the Notorious Bandit and Train Robber" "Born on a Farm, to Perish in the Brush" "The Last Moments of the Dying Desperado" "A Sketch of His Strangely Eventful Career". The report is interesting in that it reads like a novel. With a dateline of Houston, Texas, it begins: "It was the evening of Sat., July 20, 1878. The last rays f the blazing summer sun glided the housetops...The stir & bustle of the day were done..." with more. Further on, under the subhead: "The Bandit Leader" is a very detailed account of a man with: "...blood on his clothing, & it was easily seen that he was dangerously wounded...Standing near the cot...stood Maj. John B. Jones, the commander of the Texas Rangers...The young man who lay dying was Sam Bass, the great desperado, bandit, outlaw and bold chief of the Texas gang of train robbers...The outlaw had two wounds...by physicians pronounced fatal..." with more. Other subheads include: "A Sketch of the Outlaw"  "Bass Robs a Union Pacific Train"  "Startling Robbery at Allen Station" and "The Final Fight". The photos show the full report.
Not just an interesting & unusually detailed account of the life & death of this infamous outlaw, but terrific to have as the dominant article beginning at the top of the front page.
Eight pages, minor stain above the masthead, very nice condition.