Home > Back to Search Results > Lou Gehrig begins his career as a Yankee...
Click image to enlarge 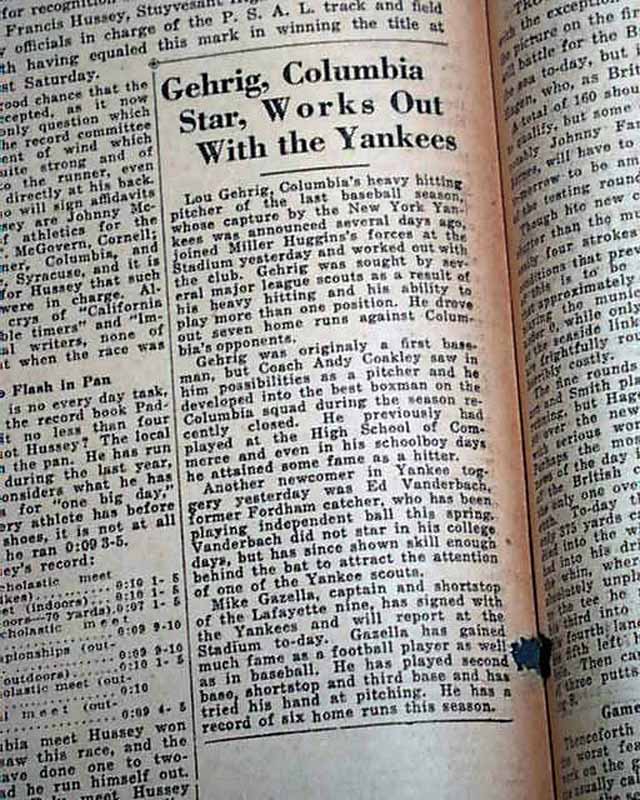 Lou Gehrig begins his career as a Yankee...

For any collector of baseball history, a report of the beginning of a future star's career always figures high on the "most wanted" list. Here is one.
The sports page, page 12, has a report headed: "Gehrig, Columbia Star, Works Out With the Yankees" with the text beginning: "Lou Gehrig, Columbia's heavy hitting pitcher of the last baseball season, whose capture by the New York Yankees was announced several days ago, joined Miller Huggin's forces at the Stadium yesterday and worked out with the club. Gehrig was sought by several major league scouts as a result of his heavy hitting and his ability to play more than one position..." with more (see).
The same page has an article concerning Babe Ruth.
Complete in 22 pages, binding slits at the blank margin, very nice condition.
Terrific to have this report in a New York newspaper, the home paper to the Yankees and Columbia University where he played. He was also a local New York high school stand-out.