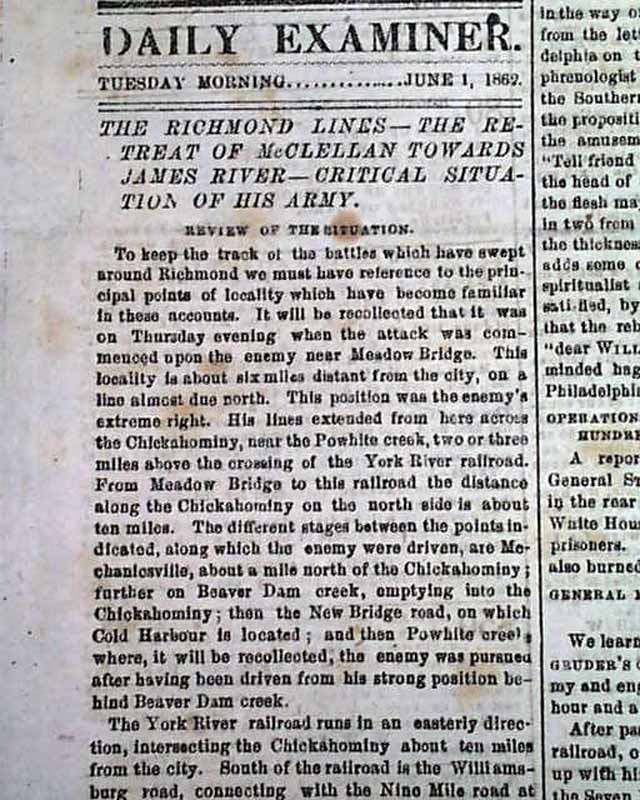 Not only a nice Confederate newspaper but one from its capital as well. Most of the front page is taken up with various reports on the Seven Days' Battle with heads & subheads including: "The Richmond Lines--The Retreat of McClellan Towards James River--Critical Situation of His Army" "Incidents of the Contest--Scenery of the Battle Fields, etc." "Latest News From the North which includes three dispatches, each signed in type: G. B. McClellan; "McClellan's Dispatches in the North" "The Yankee Despotism in Norfolk" "Mr. Lincoln Makes A Speech" "Lincoln's Mysterious Journey to West Point--Object of His Visit--Conference with General Scott...." and more. This was a critical period of the war, as had McClellan been more aggressive he could likely have captured Richmond, bringing an early end to the Civil War.
The back page includes much on the war including editorial comment beginning: "The intelligence this morning of the situation of the enemy leaves no doubt that his retreat has been intercepted & that he is again confronted by our elated troops in circumstances of great disadvantage to himself, demoralized as he is by a night retreat...We have every reason to trust that our arms are about to be crowned by a great victory..." with more.
Complete as a single sheet newspaper, some light foxing, generally nice condition.