Home > Back to Search Results > On the death of Marie Antoinette... Life of George Washington...
Click image to enlarge 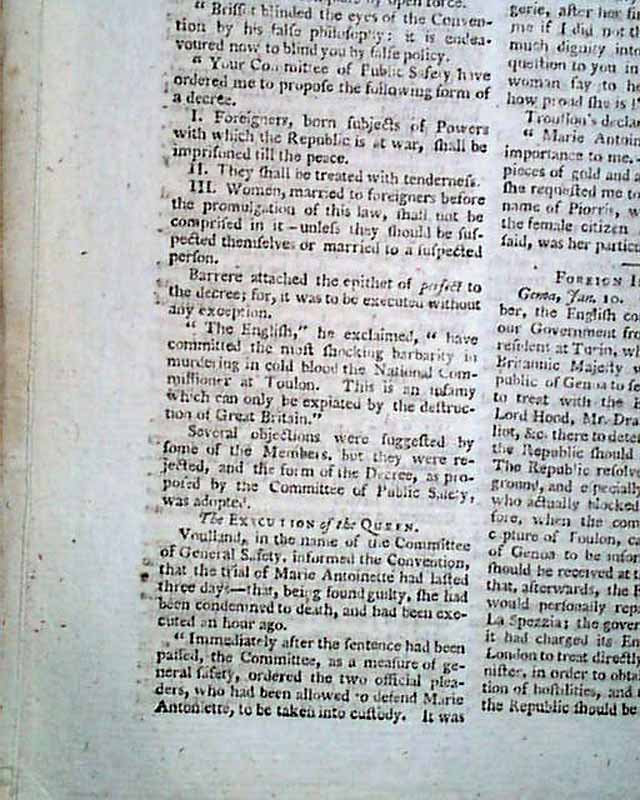 On the death of Marie Antoinette... Life of George Washington...

Item # 653282 THE GENTLEMAN'S MAGAZINE, London, February, 1794  Although there is a wide range of interesting content in this issue, the prime content is likely a report headed: "The Execution of the Queen", which has in the first paragraph: "...informed the Convention that the trial of Marie Antoinette had lasted three days--that, being found guilty, she had been condemned to death, and had been executed an hour ago...". The balance of the report concerns the two defense attorneys who were detained presuming Marie Antoinette had disclosed some "...secrets of importance" to them, but their testimony was they received nothing of substance from her (see).
A few pages letter is a short biography of George Washington under the heading: "America", beginning: "Mr. Washington, the enlightened President of the United States, at the age of fourteen was a midshipman in the British navy; before he reached twenty he began his military career as major of the Virginia militia..." with more on his careen in the French & Indian War, etc. (see).
Complete with all three full page plates called for, including a view of St. Malo.
Complete in 96 pages, 5 3/4 by 9 inches, full title/contents page featuring an engraving of St. John's Gate, unevenly trimmed margin, otherwise in very nice condition.