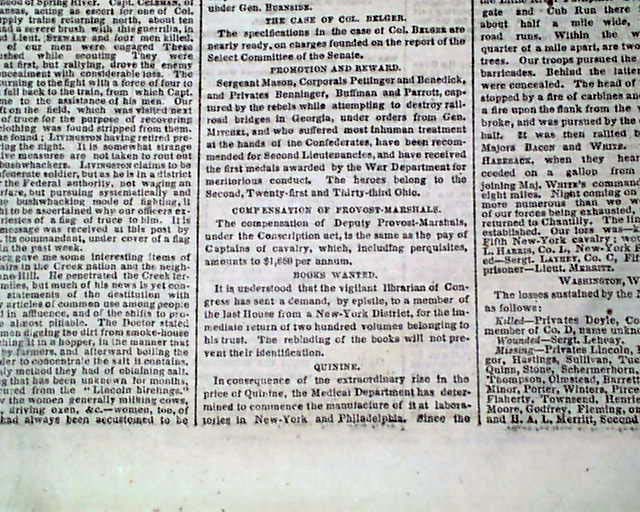 This issue has--and on the front page--a report somewhat inconspicuous in its presentation yet exceedingly significant in its place in history. It lists the very first recipients of perhaps the most prestigious & coveted award for military valor: the Medal of Honor.
Near the bottom of the ftpg. is a single-column heading: "PROMOTION AND REWARD," which states: "Sergent Mason, Corporals Pettinger and Benedick, and Privates Benninger, Buffman and Parrott, captured by the rebels while attempting to destroy railroad bridges in Georgia, under orders from Gen. Mitchel, and who suffered most inhuman treatment at the hands of the Confederates, have been recommended for Lieutenancies, and have received the first medals awarded by the War Department for meritorious conduct. The heroes belong to the Second, Twenty-first and Thirty-third Ohio."
These six soldiers participated in the famous Great Locomotive Chase of the prior year.
The [Congressional] Medal of Honor award was officially instituted in March of 1863 (similar awards were previously given by several branches of the military on an informal basis), making these the first to receive the award, Jacob Parrott being the very first to receive the honor.
The balance of the the front page has a variety of Civil War reports, plus more inside, but they pale in significance to the Congressional Medal of Honor report.
Eight pages, evenly toned, nice condition.