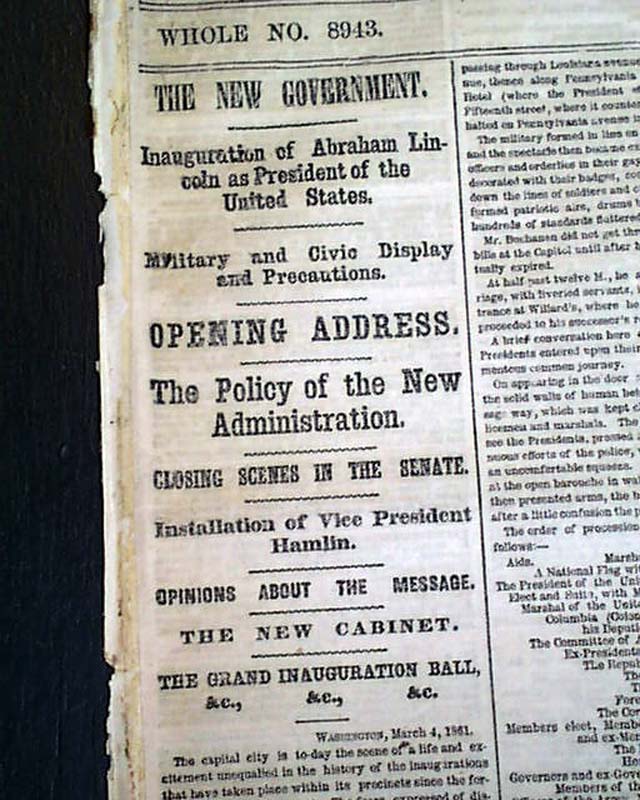 The top of the front page has nice one column heads announcing the significant news of Abraham Lincoln's first inauguration, the heads including: "THE NEW GOVERNMENT" "Inauguration of President Lincoln as President of the United States" "Military & Civic Display & Precautions" "Opening Address" "The Policy of the New Administration" "Installation of Vice President Hamlin" "The New Cabinet" "The Grand Inauguration Ball". The front page also includes: "The Inaugural Address" which takes over 2 1/2 columns, and is followed by: "Opinions of Mr. Lincoln's Inaugural".
Before the inaugural address is some interesting reports including: "...Mr. Lincoln is received with cheers. He lays down his manuscript, claps his hands in his pockets & pulls out a pair of steel bowed spectacles....A lusty hawk eyed fellow cries out, 'Take off them spectacles, we want to see your eyes.' 'I didn't know he wore glasses', remarked another...The following is the address, which he read in a clear, distinct voice:...".
Note: this issue is in "2nd rate" condition at best. There are dark tape stain to the front page, plus an archival mend across the central fold which includes some text loss. The first leave has been trimmed at the blank margin making it smaller than the other leaves, but no text loss.