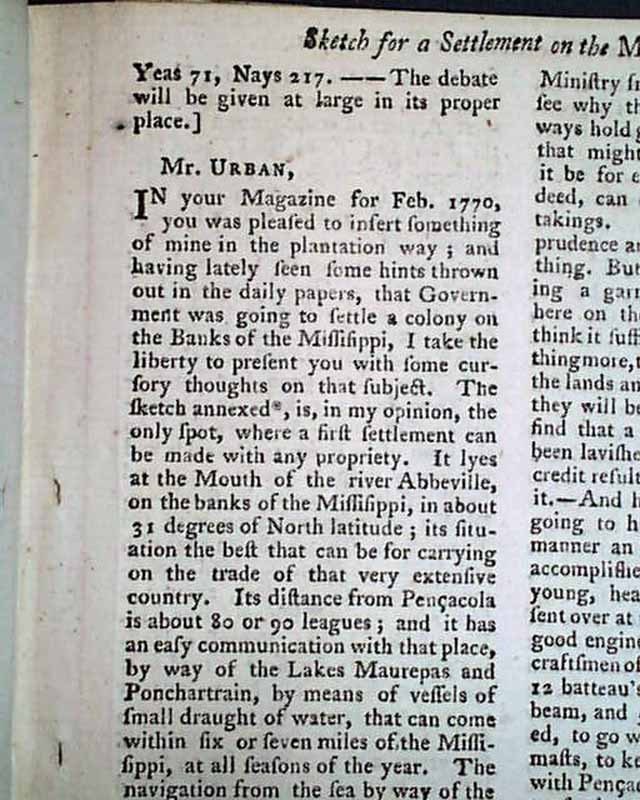 * Nice map of "West Florida"
* Pensacola, Florida, to New Orleans, Louisiana
* Plate of a rare bird from the Hudson Bay

Certainly the most notable item in this issue is the very nice foldout map titled: "A Map of Part of WEST FLORIDA" from Pensacola to the Mouth of Iberville River, with a View to shew the Proper Spot for a Settlement on the Mississippi." The map shows much detail (see) and includes a nice inset of a "Plan for a New Settlement". This area is present-day Pensacola, Florida to the river delta at New Orleans, and includes Biloxi, Mississippi and Mobile, Alabama. The map measures 8 by 14 inches. Relating to this foldout map is a lengthy article titled: "Sketch for a Settlement on the Mississippi" (see for portions).
This issue also includes a full page plate titled: "Hudson Bay Ptarmigan..." which shows two views of this bird (see). There is also a related article on the facing page titled: "An Account of the Ptarmigan, a Bird of Hudson's Bay" (see).
Other articles in the issue noted on the title page include: "Particulars of the Late Revolution in Denmark" "Bougainville's Account of the Settlement of Faulkland Islands by the French" "Account of the Constitution of Denmark" "On the Criminality of Killing Insects" and more.
Complete in 48 pages with full title/contents page, measures 5 by 8 1/2 inches and is in very nice condition.

A very nice issue from just before the Revolutionary War with various content. This was the first periodical to use the word "magazine" in its title, having begun in 1731 and lasting until 1907.