Home > Back to Search Results > Grant and Lee in Virginia...
Click image to enlarge 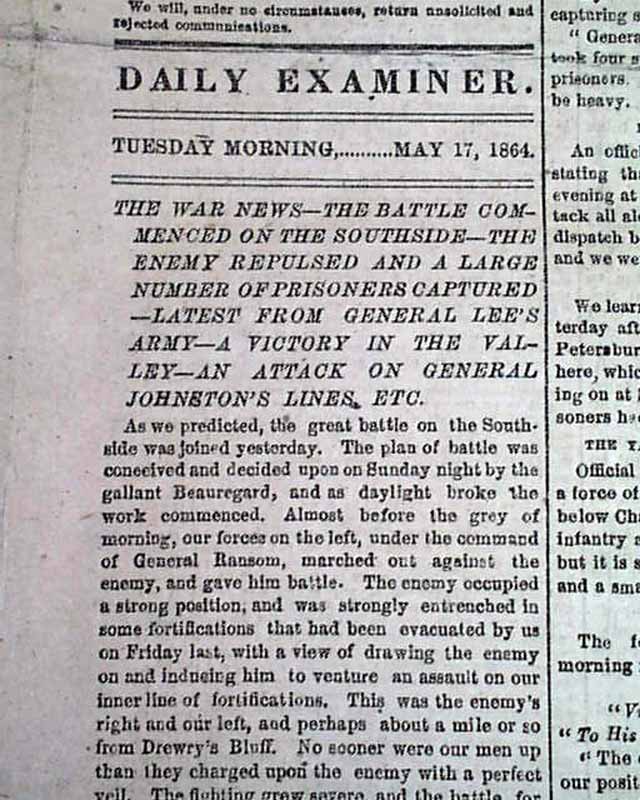 Grant and Lee in Virginia...

Not only a newspaper from the Confederacy, but from the capital of the Confederate states. Among the front page reports are those headed: "The War News--The Battle Commenced on the Southside--the Enemy Repulsed and a Large Number of Prisoners Captured--Latest From General Lee's Army--A Victory In the Valley--An Attack on General Johnston's Lines, Etc." which takes close to 3 columns & has much detail on the Yankee's major offensive in Virginia (see for potions). Included within the report are a letter signed in type: G.T. Beauregard and another: R. E. Lee, among others. Also on the ftpg: "List of Casualties from the battle at Spottsylvania; "McNeil's Captures" "Funeral of the Late Colonel Henry Clay Pate.
The back page features a lengthy editorial which focuses much on the work of General Grant (see for portions). Also: "The Confederate Congress" reports; "Additional From the North--Yankee Accounts from Arkansas" & a few other smaller items.
Complete as a single sheet newspaper with a full banner masthead, very nice, clean condition.