Home > Back to Search Results > No new taxes for America...
Click image to enlarge 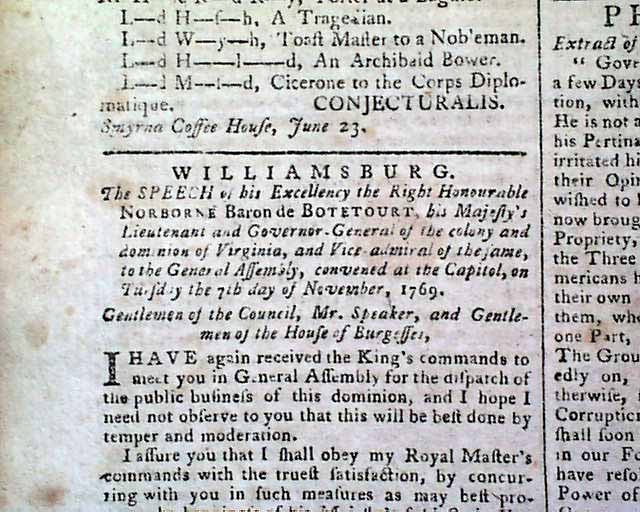 No new taxes for America...

Inside has an address by the governor of Virginia to the House of Burgesses concerning a boundary line between the colony and Cherokee Indian land. This is followed by another address noting: "...that his Majesty's present administration have at no time entertained a design to propose to parliament to lay any further taxes upon America for the purpose of raising a revenue, & that it is their intention to propose in the next session of Parliament to take off the duties upon glass, paper and colours...". (see)
Other news of the day & a wealth of ads. Eight pages, 9 1/2 by 11 3/4 inches, very nice condition. Handsome coat-of-arms engraving in the masthead.

This newspaper was a primary means in voicing the anti-British sentiment that was rapidly spreading throughout the colonies prior to the American Revolution. The paper gained much notoriety when Goddard printed an article voicing his support for the Boston Tea Party. The paper's sympathies and general revolutionary message were a cause of great concern to the British. Soon the newspaper was heavily taxed for its delivery by the Crown Post (the colonial mail system in use at the time), and later the Crown Post simply refused to deliver the publication, driving the newspaper out of business in 1773. This prompted Goddard and Benjamin Franklin to establish an alternative mail system independent of the Crown Post authorities. This alternative system ultimately became the basis of a postal system that would later become the US Post Office. (Wikipedia)