Home > Back to Search Results > Just prior to the 2nd battle of Bull Run...
Click image to enlarge 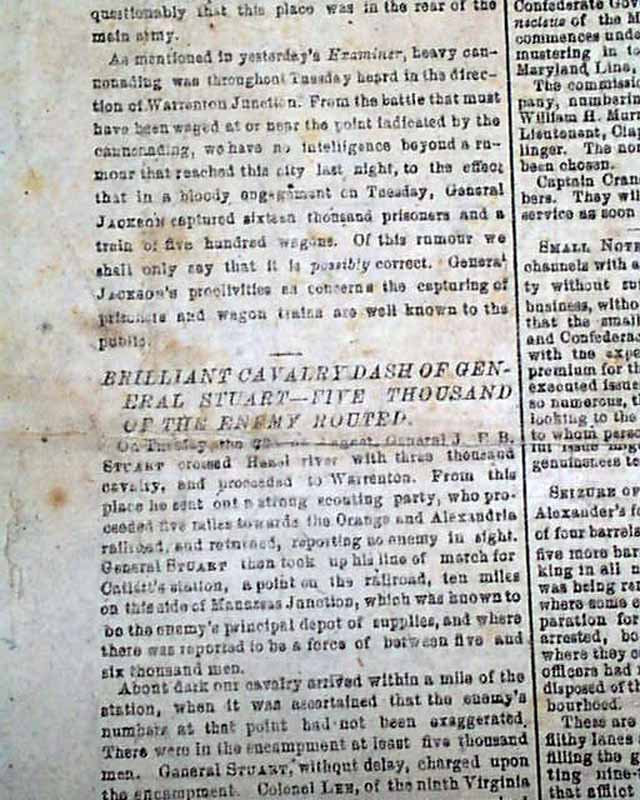 Just prior to the 2nd battle of Bull Run...

A nice newspaper from the capital of the Confederacy. The front page has much concerning the Civil War including items headed; "From The Seat of War" which reports that: "...Pope is hastily retreating to Alexandria, where it was expected he would make a stand...". Further on is a report headed: "Brilliant Cavalry Dash of General Stuart--Five Thousand Of the Enemy Routed" with reports on the fighting just before the 2nd battle of Bull Run (see photos). Also on the ftpg: "Important Debate in the British Parliament on the Question of Recognizing the Confederate States" & there are several Acts from the Confederate Congress, one of which is: "An Act to Punish Drunkenness in the Army." (see photos)
The back page features the always-interesting editorial of this newspaper, beginning: "It is well that Congress has turned its attention to the monstrous abomination now fully installed  throughout the Confederacy, known as Martial Law..." with much more. Close to half of the bkpg. is reporting from: "The Confederate Congress", and there is also: "The Conduct of the War--The Danger of Delay" and "Supplies For the Hospitals"
Complete as a single sheet newspaper with a full banner masthead, a printing error in the upper right affects no mentioned reports. Some creases near the margins, a few small archival mends at the margins, otherwise in nice condition.