Home > Back to Search Results > "Confederate States of America"...
Click image to enlarge 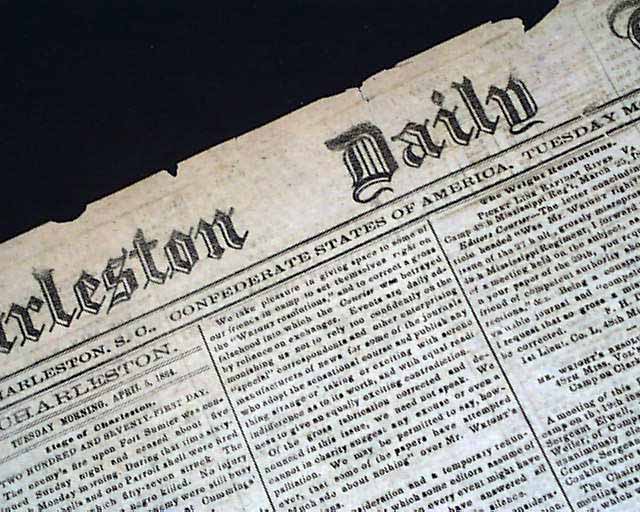 
CHARLESTON DAILY COURIER, South Carolina, April 5, 1864  This was one of very few Confederate newspapers which printed: "Confederate States Of America" in the dateline (see).
The front page has much reporting on the war including items headed: "From Richmond--Official From Gen. Forrest--Capture of Six Hundred Yankees" "Movements of Grant" "From Dalton, Ga.--Northern Accounts of Forest's Movements" "From Atlanta--Destruction of Negro Plantation" "The Red River Expedition" "Western North Carolina" "Siege of Charleston" "The New Issue" "The Wright Resolutions" "Seward's Dispatch to Mr. Adams about the Rams" "Interesting From the North--Western Maryland, etc."  "The Corruption at the North Growing out of the War".
The back page is mostly taken up with ads and notices but does have a few war-related items.
Complete as a single sheet newspaper, several discreet archival mends near the margins, minor chipping at the top margin, generally nice.